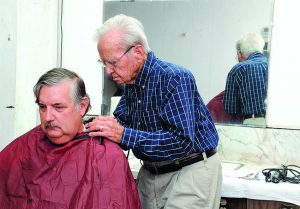 In more than seven decades as a barber, Stewart Watts seldom, if ever, had an audience like the one he enjoyed Saturday.

Family, and just a few friends watched the end of an era, Watts’ hands perhaps more steady than his legs as ended his career with one last haircut, a quick grooming for Cephus Piver, a faithful customer and friend who said he wanted the honor.

It was a fitting, joyful occasion for Watts and those who bore witness to not only his last professional haircut, but his first since March 2020, when COVID-19 shut down his business and countless others like it.

“Mr. Cephus is one of my lifelong customers,” Watts said as Piver took the chair in the nearly stripped shop. Family had already taken most of the furnishings, all but one barber chair, photos and an airplane model that often stirred conversation in the shop.

Not known for small talk, Piver said little as Watts, with an assist from daughter Vikki, placed the cape around his neck. Watts started with scissors, then clippers, as he performed the routine he likened to riding a bicycle.

“It comes right back,” Watts said.

Now 98, Watts said he’s ready for his 99th birthday next April. He’s a World War II veteran who picked up his trade in the U.S. Army Air Corp, and after coming home completed barber school in Durham.

Watts wanted to fly, but was medically disqualified. He joked Saturday that his dream did come true.

“I did plenty of KP,” Watts said. “Cutting potatoes. I would pile it here and pile it there. I was a pile-it.”

Serving in a miserably hot war zone on Biak Island in New Guinea, “one degree off the equator,” Watts said, another opportunity presented itself.

“The barber’s eyes went bad,” Watts said in a 2010 interview. “He asked me if I wanted to do it. The first few haircuts were kind of tough, but they got to looking better and better.”

“What’s the difference in a bad haircut and a good one?” Watts asked as he held court one last time in the shop that launched his career in Tabor City in 1948, the building he bought in 1966.

Haircuts cost just 50 cents when Watts began his career, both in the military and in civilian life. Of course in the Army the barber got none of that money, directly, Watts recalled.

Those tips varied greatly, and were rare from soldiers from the south, where times were hard and money hard to come by.

“I was glad I was in a Yankee outfit,” Watts said with a chuckle. “Those people tipped.”

Stewart was always slow to raise his prices, the cost of a haircut was still $8 when the pandemic shuttered his shop. Piver shoved a bigger bill in Watts’ hand after rising from the barber chair, money Watts tried to refuse, but his final customer insisted.

Also present were the new owners of his corner building on West 5th Street, Joe Brennaud and Sasha Zianouka. She took notes, he took numerous photos with an old, film tripod mounted camera. 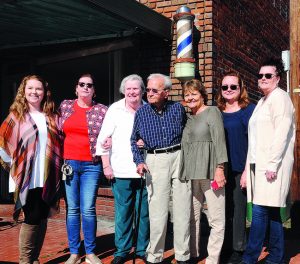 Stewart Watts spent a moment under the old barber pole outside of his shop Saturday with some of the many women in his family (from left) granddaughter Jordan Gaskins, daughter Susan Thomas, wife Miriam Watts, and daughters Cheryl Mills, Vikki Stocks, and Paula Laughinghouse. (Deuce Niven, TLT)

An old, old fashioned barber’s pole mounted on the brick outside the shop sat still as Watts deftly maneuvered clippers and scissors, and a brush to sweep away stray hair.

“That hasn’t worked in years,” Watts said. “It was built in 1929, it was powered by a spring then. When you wound it, it would last all day.”

That spring gave its last decades ago, electric motors replacing it more than once during the decades since.

With Watts’ last haircut performed, as family and friends reminisced, most of the women dear to his life, including his wife and daughters, posed under that old pole.

Minutes later, it was taken down, an heirloom and part of Watts’ history, his legacy.

In hindsight, the barber’s chair seems destiny for Stewart Watts. He joked Saturday about the path not taken and a ride to the Triangle with Frank McGougan, who became a renowned local attorney.

McGougan got off the bus at Wake Forest, Watts near the barber school.

“I went to the wrong school,” Watts quipped. “I should have got off the bus with him.”

Countless men whose appearance have been improved by the clippers, scissors and razors in Watts’ hands; and whose lives have been enriched by the warmth and charm of their barber, might disagree.