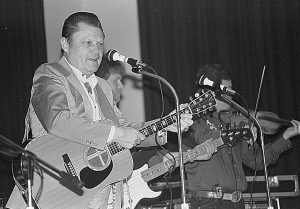 Stonewall Jackson, a country music legend and Tabor City native who just a few years ago gave his blessings to welcome signs erected in his honor, died Saturday. He was 89.

His death, following a long battle with vascular dementia, was reported Saturday by Nashville’s Taste of Country at tasteofcountry.com.

Born Nov. 6, 1932 in Tabor City, Jackson was raised in Georgia, but was familiar to many in Tabor City as he returned for visits as a boy and into his teen years, local resident Teddy Bullard Sr. recalled Tuesday.

“He was kind of close to some of my uncles’, my Mom’s brothers,” Bullard said. “Sometimes, in his teens, he would stay here with a relative or a friend. He spent quite some time in and around Tabor during his mid- to late-teens.

During some of those visits, Bullard said, Jackson and his mother, now deceased, began dating.

Bullard said he’s not sure how old she and Jackson were, but the future country singer’s visits were limited, years sometimes passing between them.

Time moved on for both, and Mary Lou Watts became Mary Lou Bullard, and a mother many times over, in her teens. That was not uncommon in the 1940s and 1950s, Bullard said.

That relationship has long been “family lore,” Bullard said of his mother’s connection to Jackson. “Mom acknowledged that herself to me.”

Eventually Jackson came back to town, and came calling, the story Bullard said he heard from his sister, Tammy.

“Tammy said he came to grandmother’s house to visit, and asked about Mom,” Bullard said. “Someone called Stonewall to the side. She was married, her fourth child was on the way. That was Tammy.”

There are other local connections. Bullard said Jackson and the late Robert Nealey were near lifelong friends, and that he believes the two not only played music together, but that Jackson “set up some gigs for Robert in Tennessee.”

Jackson returned to his home town during the 1990 North Carolina Yam Festival, playing two concerts that brought nearly 600 people to the Beth R. Woody Auditorium on what was then the Tabor City Primary/High School campus.

Bullard said his parents attended one of those concerts, giving Mary Lou a chance to reconnect with her childhood friend.

“He gave her an autographed picture,” Bullard said. “I’ve got it…somewhere.”

Jackson talked of his early years during the 1990 festival. He was born in the Emerson Community, just two miles north of town, and was a toddler when the family moved to Georgia.

“We moved when I was about 3,” Jackson said during the 1990 festival. “But I came back when I was 14 and was here for a couple of years. Then I went off to the Army. I was too young, and I got in trouble, and they kicked me out. I went back in a couple of years and joined the Navy.”

Jackson made it to Nashville in 1956, hoping to sell some songs to some publishing houses. Within days he had signed a five-year contract with the Grand Ole Opry, and he re­mains a part of the Opry.

A busy career was Jackson’s explanation for never visiting aunt’s and other family that re­mained in Tabor City.

“I’ve been busy seeing every­one now,” he said. “We’re going out to Emerson this afternoon to visit my dad’s grave.”

“People here have changed a lot, it seems like,” he said. “The town’s grown some, there are nicer buildings.

“I’m so glad to be a part of this,” Jackson said of the festival. “This has been good.”

Nelson Lee, who was then Mayor, proclaimed Nov. 8, 1990 as Stonewall Jackson Day in Tabor City.

In his proclamation, the mayor said Jackson has “brought acclaim to himself and his hometown.”

Jackson always claimed Tabor City as his birthplace, a fact reflected in many of the news stories that followed his death on Saturday.

“Stonewall Jackson became a member of the Grand Ole Opry about as fast as anyone ever did,” his biography at opry.com says. “It took him about 24 hours.”

Before his death, Jackson was the most senior member of the Grand Ole Opry and a familiar face at the Nashville shrine for more than 50 years, Taste of Country reported. He was a member for 65 years, joining on Nov. 3, 1956.

Bill Anderson, with a little more than 60 years as an Opry member, is now its senior artist.

To honor Jackson’s legacy, Saturday nights Grand Ole Opry was dedicated to him.

Jackson is survived with his son, Stonewall Jackson Jr. He was predeceased by his wife, Juanita Wair Jackson, who died in January 2019.