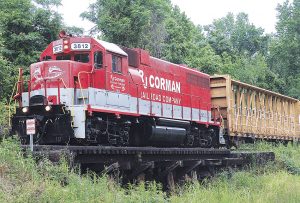 Battered by hurricanes that decimated its downtown, Fair Bluff’s plans for a new uptown area away from potential floodwaters have been given a boost with a donation of land by R.J. Corman Railroad.

News of the gift came from a corporate news release just two days before Christmas.

“This donation will allow the town to move forward with its plans to construct a new commercial center funded by grants from the US Department of Commerce and the State of North Carolina,” the news release said. “The Economic Development Administration (EDA) has previously announced that it will grant Fair Bluff $4.8 million to construct eight new storefront buildings on Main Street.”

“We are grateful for R.J. Corman assisting us in our recovery there,” Leonard said.

Mayor Billy Hammond said the gift will have important consequences for the town.

“Our local economy has been devastated by the two floods, and we have a lot of riding on the success of our new uptown,” Hammond said. “Without R. J. Corman’s donation, this new business area would not have been as successful.

“We can’t thank R. J. Corman enough for working with our small town as we continue to plan our recovery from the natural disasters.”

Flooding associated with Hurricane Matthew in 2016 and again by Hurricane Florence in 2018 “completely inundated the existing downtown destroying every commercial building there,” the news release said. “Town leaders decided to pursue the EDA grant to provide some commercial space for the town’s future.

“The new storefront area will be located on higher ground that did not flood in either hurricane and is being called ‘uptown’ by local leaders to contrast it with the existing downtown, which will have to be demolished and removed.”

Corman track runs through Fair Bluff, and the company owned a small parcel of land there. Corman leaders said the gift was intended to allow town decision-makers to plan for its new uptown.

For more on this story, this week’s news, and a look at our Top Ten stories of 2021, see today’s Tabor-Loris Tribune in print and online.