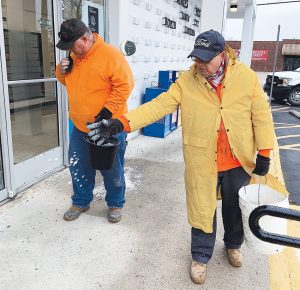 Public Works employees for the Town of Tabor City were throwing salt on city sidewalks Friday morning, in advance of an ice storm expected during the afternoon. Assistant Director Mitchell Fowler was on the radio with Director Donald James, talking about where to go next, while Mark Powell threw salt in front of the U.S. Post Office. (Deuce Niven, TLT)

Impacts from a winter ice storm moving into a broad region of the eastern Carolinas including the Tabor-Loris Community are arriving a bit later than expected just Thursday, but forecasts for significant issues remain strong.

“Do not get lulled into a sense of complacency,” a NWS briefing just after 8:30 a.m. said, “conditions will be deteriorating during the afternoon and tonight.”

Freezing temperatures are moving eastward, already across the Lumberton, Elizabethtown and Wilmington area, the NWS said.

“However, fortunately the initial round of precipitation has shifted off the coast while only remaining spotty/light along coastal Cape Fear areas as of 8:30 a.m.

“There is high confidence that another round of precipitation will begin to overspread the area especially this afternoon.” 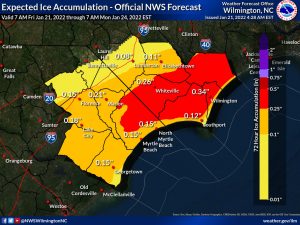 Freezing rain is expected to become widespread by mid-afternoon, the NWS briefing and charts indicated, bringing “the timing of the most impactful conditions” to this afternoon and tonight.

A freezing rain accumulation graphic is “showing a considerable swath of icing from portions of Horry County northeastward into Pender and southeastern Pender County.

“There also could be more snow impacts, generally along and west of I-95 where 1-2 inches of snow accumulation is possible.”

States of emergency remain in place for both Carolinas and for Columbus and Horry counties, with curfews from 8 p.m. to 6 a.m. both Friday and Saturday nights, ending Sunday morning.

Look for updates here as events warrant, and complete coverage of the winter storm and its impacts in the next Tabor-Loris Tribune in print and online.