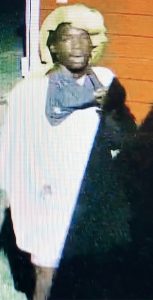 A ‘person of interest’ recording on surveillance video during a gun shop break-in needs to be identified, and the Columbus County Sheriff’s Office is asking for help in a June 15 news release.

Deputies responding to a June 1 alarm call at MAT Gun Garage on Seven Creeks Hwy in Nakina arrived with the suspects still inside, the news release said.

“Four male suspects fled the business and ran towards the fence line,” the news release said. A door and glass counter inside the business were damaged, and two “red dot sights” were taken.

Anyone who recognized the “person of interest” in the released surveillance image is asked to contact Columbus County Sheriff’s Office at 910-642-6551, to send information on the CCSO Facebook messenger account, or to provide an anonymous tip using the CCSO app or here.