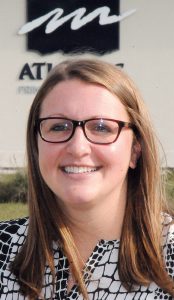 Now Amy Scott is off to see parts of the world she little imagined visiting just a year ago, taking part in The World Race.

Amy was also a part of Atlantic Packaging, working in the printing division of this newspaper’s parent company for a decade following her 2012 graduation from Appalachian State. She left work Friday, and will spend much of her time with her parents in the Charlotte area before leaving on her 11-month World Race mission in September.

World Race, its website (worldrace.org) says, is “A life-changing mission trip where you will grow with God, serve with others, and make a difference.”

It’s also, Amy said, where she feels called to spend the next year of her life. It represents a chapter in her life’s journey with as many unknowns as certainty, one she seems to be approaching with slightly nervous enthusiasm.

“I want to actually live my faith and grow that part of my life,” Amy said.

Growing up in Charlotte, Amy said she enjoyed the relatively small town life of Boone as she attended Appalachian State, where she graduated with a BS degree in Graphic Art.

She interned at Atlantic in Tabor City, and said she was thrilled when Jay Gibble, then the printing manager, offered her a job immediately upon graduation.

“I was listening to a podcast that talked about The World Race,” Amy said. “It was The Girls Night podcast with Stephanie May Wilson.”

Episode 31 of the podcast (girlsnightpodcast.com) is titled “Mission trips: How God Can Use You (and Transform You!) When You Go”

Amy wasn’t transformed, yet, but she was interested. She made contact with The World Race, talked a little, listened a lot.

She thought of hitting pause. Conversations with a World Race leader and an acquaintance also taking part in a World Race mission gave her pause, instead.

“They said ‘what are you waiting for?’” Amy said. The World Race leader told her to consider the options. “‘What are you going to do with a year or two, maybe add a bit to your 401K?’”

It was after Amy made the decision to dive in, now, that she realized the critical timing of her decision.

“I’m 31. If I had put it off, I would have lost this opportunity. That was a God nod to me that this was the right decision.”

Getting ready has been a big part of the journey, and she hasn’t yet left U.S. soil. Vaccinations, she wrote on her theworldrace.org blog, proved to be an expensive challenge requiring thought and prioritization skills. Most insurance, she learned, won’t pay for those vaccines.

Her lifelong fear of mosquitos, and the realization that the pests transmit various disease, some potentially deadly, helped steer some of those decision, she said.

Gear proved another learning lesson. World Race members live out of a backpack. They may or may not be living in tents from time to time, but they need to be able to easily carry their clothing, bedding, and other essential items. She’s been given plenty of good advice on what to take, and how to pack.

“I was told to pack and unpack my backpack many times before I go,” she said. Practice, she said, will help perfect the art of packing.

World Race members are divided into squads, 32 or so men and women who travel from country to country, though they may split off into smaller groups – no smaller than 4 – as they serve in specific locations.

Amy said she will start her World Race mission work in Guatemala, then leave Central America for Kosovo in southeast Europe. Albania, Jordan and Thailand are also on her itinerary.

There are opportunities and challenges in each country, Amy said. Romania may offer an opportunity to minister to refugees from Ukraine’s war.

“I’m hoping to be able to talk to some people from Ukraine and hear their stories,” she said. “I hope to stress to them that there is hope.”

Jordan may offer an opportunity for a bucket-list off-mission excursion, a visit to the Biblical Dead Sea.

Thailand, Amy said, may require extra care in terms of security because of its reputation for human trafficking and sex tourism.

Amy expects her World Race experience to be life changing, and realizes that she can’t know, yet, what that means.

Right now, she said, she doesn’t expect to become a full-time missionary, her more likely path to find ways to be of service while pursuing a career.

She doesn’t know if she will look for work at Atlantic again, though she clearly left the company on good terms; or if a home in the Tabor-Loris Community is in her future.

“I do hate to leave Atlantic,” she said. “They are my family, too.”

To follow Amy Scott on her World Race mission, or to support her fund-raising goal, visit here.