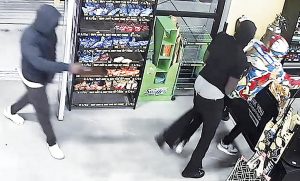 Three men are being sought for the armed robbery of a rural Dollar General store near Tabor City on Friday, the Columbus County Sheriff’s Office reports.

Deputies responded to the store just after 9 p.m., and found that two employees and three customers were in the store when the men entered the store, holding an employee at gunpoint while taking more than $900 from the store, a CCSO news release said.

All three suspects were described as black men, though their clothing was different. They were wearing:

All three left the store on foot traveling towards Tabor City.

Anyone who recognizes these men is asked to contact the sheriff’s office at 910-642-6551. Anonymous tips may be submitted using the CCSO app or at here.

For much more of the week’s news see today’s Tabor-Loris Tribune in print and online.