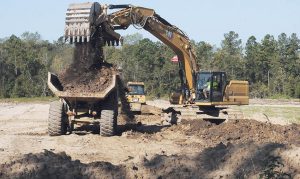 Cottonwood Place? It’s not clear if that will be the name, but site preparation is underway on a large tract of land just off of Dothan Road, near Short Cut Road into Horry County. (Deuce Niven, TLT)

A series of grant application resolutions adopted by county commissioners Monday will, if approved, set the stage for significant water improvements to the area, including a water tank and three wells, improvements to 4 inch water lines, and planning for the growth already on the way.

“We’re wanting to get ahead of the curve,” Lanier said Tuesday. “There are four developments looking to locate in southeastern parts of the county. We’re talking 600 to 800 homes.”

One major development is becoming apparent no Dothan Road, near Short Cut Road and not far from the South Carolina border. Significant site preparation is underway on the project labeled on 2007 planning documents as Cottonwood Place, Lanier said.

“I’ve heard they are hoping to have some houses move-in ready by next spring,” Lanier said. “They’ve got a lot of work to do.”

GSWSA lines are available in portions of southeastern Columbus, Lanier noted, because the utility services Old Dock Elementary School through an agreement with county government and the county schools.

Lanier, who also serves as the county’s Economic Development Director, said the effort to improve infrastructure will not only enhance new housing efforts, but business and industry recruitment, too.”

“The old adage is ‘jobs follow rooftops, and rooftops follow jobs,’” Lanier said. “We’re one of few counties in North Carolina to see a continuing decrease in population. We need to reverse that trend.”

Industry won’t invest in areas where the potential workforce is in decline, Lanier said. New housing will bring new residents, and while some may retirees who want to live near, but not too near, to the Carolina beaches, there will be others.

Some retirees from elsewhere will bring younger families along, sons and daughters who visit, at first, learn to enjoy the climate and lifestyle, and choose to relocate.

For more on this story and the rest of the week’s news see today’s Tabor-Loris Tribune in print and online.