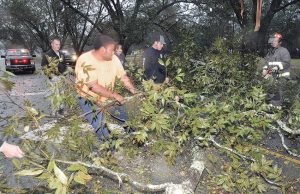 Winds were picking up, trees, limbs and power lines coming down across Columbus and Horry counties after Hurricane Ian came ashore in Georgetown Friday afternoon, and began moving in a line expected to take it through Florence, then Charlotte, storm remnants expected into central North Carolina Saturday morning.

Some 6,000 Duke Energy Customers in Columbus County were without power at 5:30 p.m. Friday, more than 3,400 Brunswick Electric members in the county, too. Fire departments across the county were responding to tree down calls that nearly overwhelmed the county’s 911 center.

Santee Cooper Electric was reporting thousands of power outages across Horry, the most along the coast, but more than 1,000 in the Loris area.

Horry Electric was reporting outages, too, thousands near the coast, hundreds either active or expected inland.

Conditions are expected to improve rapidly overnight, as the storm moves away, the NWS reported. 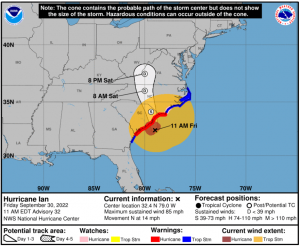 “We’re starting to get a lot of trees down and some scattered power outages across the county,” Columbus County Deputy Emergency Services Manager said just before noon Friday, as Hurricane Ian continued moving towards the Tabor-Loris Community.

Forecasters were expecting landfall early this afternoon, possibly in Georgetown County, with storm surge along the entire South Carolina coast well into the Cape Fear the most significant impact.

Inland Horry remains in with a hurricane warning, Columbus under a Tropical Storm warning, with the expectation of tropical storm force wind gusts throughout the Tabor-Loris Community this afternoon.

Conditions are expected to improve rapidly Friday night into Saturday morning, with the center of the storm near central North Carolina by daybreak, a National Weather Service bulletin issued just before noon said.

There are no current plans for shelter openings in the area. Rain, even more than wind, will likely be the biggest impact from Ian in the TLC, but because the storm is moving relatively quickly, its forward speed at 10 miles per hour or higher, nothing on the scale of Hurricanes Matthew or Florence is projected.

Area rivers are well below flood stage, with no river flooding anticipated as a result of Ian, the NWS reported.

Some damage to weaker structures, falling trees and limbs, and isolated flooding covering some roadways will take place this afternoon and into tonight, the NWS said.

States of Emergency have been declared in Columbus and Horry counties, and emergency officials urged residents to stay where they are until the storm has passed.