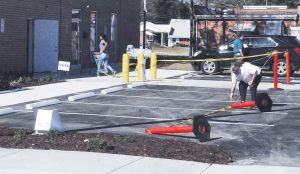 A campaign worker picks up pylons outside the South Williams Precinct poling place at the Tabor City District Court Building during Tuesday’s general election. The election marked the first public use of the facility since the new parking lot was completed late last week. (Deuce Niven, TLT)

Former Columbus County Sheriff’s Jody Greene was the top-voter getter in the race for the county’s top law enforcement post in Tuesday’s general election, but is expected to face a legal challenge to wearing that badge again.

Greene resigned last month as a hearing initiated by District Attorney Jon David to remove him from office was getting underway in Whiteville after the public release of a 2019 audio recording that appeared to show Greene making racial slurs, threatening to fire Blacks at the Sheriff’s office, and later firing ranking black deputies there.

David, who was unopposed for re-election on Tuesday’s ballot, pledged last month to renew the effort to remove Greene from office, should he win election this week.

With all 21 precincts reporting in after 10:30 p.m. Tuesday, Greene held a lead of more than 54 percent to less than 46 percent for Democrat challenger and former sheriff’s captain Jason Soles.

It was Soles who provided the 2019 recording he said was made during a late-night phone call from Greene, who had stepped aside as sheriff as legal challenges to his 2018 election played out.

David, in an amended petition to remove Greene from office last month, called allegations that included referring to Black Democrat deputies as “black bastards” “disqualifying” for anyone seeking to serve as sheriff.

Greene, in a Facebook post, described allegations against him as “politically motivated” while apologizing “for the disrespectful and insensitive words that have offended my friends, colleagues, and fellow citizens.”

In Tuesday’s unofficial count, Greene claimed 10,034 votes, Soles 8,458. That does not include provisional ballots, but does include early votes, which were significant.