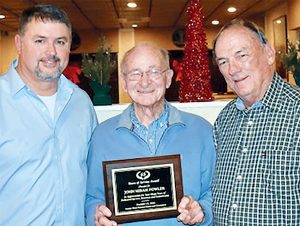 “I was home for two weeks from the Army,” Hiram said Monday. It was a conspiracy between my wife and Ralph Inman.”

Marie Fowler had followed her husband’s Army career to Texas and Washington, D.C. At home, on leave, she wanted to stay.

“I had been assigned to Walter Reed,” Hiram said of the famed Army hospital, located near the nation’s capital in Bethesda, Maryland.

His job as an operating room assistant was a good one, and Hiram was considering an Army career.

Marie, who died in November 2010, had a different idea.

So, Ralph Inman approached the young military man with a civilian job offer in his home town, as an assistant at Inman Funeral Home.

It went, by all accounts, very well. Hiram celebrated his 65th anniversary as an Inman Ward employee during a company Christmas gathering on Dec. 15.

“It was a complete surprise to me,” Hiram said. “I was surprised with that plaque.”

“I was 11 or 12 when he came here,” Ben said. “He’s a brilliant person, he could have become a doctor or anything he wanted to be. He chose to be here.”

Hiram dove into the business, which in those days included ambulance duty – rescue squad’s and today’s emergency medical services system were still years away – in addition to the regular operations of a funeral home.

“He worked for a while, and he wanted to go to school to be licensed,” Ben said. “He and Marie went to Louisville, Kentucky for a year.

Hiram still holds certifications as a licensed embalmer and funeral home operator. After taking his state examination, he opted for a national test.

“On the national board exam he got the next to the highest score ever recorded,” Ben said.

Hiram “stayed and stayed,” Ben said. Mitchell echoed that and everyone involved stressed that Hiram has not retired.

“He is a fixture around here and will continue to be,” Mitchell said. “We call on him all the time.”

Grave locations at Forest Lawn and Myrtle Greene cemeteries are mapped, but when the need arises to find one, especially at Forest Lawn, it’s quicker to ask Hiram.

“He knows all of the graves at Forest Lawn,” Mitchell said.

Though he’s still licensed in both Carolinas, Hiram these days works funerals mostly, and is not involved in embalming or management.