A pre-dawn derailment of six gravel carrying cars on an RJ Corman Railroad line caused countless of cars on US 701 south of Loris to slow, some with phones taking photos or video, but otherwise the community disruption Saturday seemed minimal.

There were no injuries, no fuel or hazardous materials involved in the derailment. 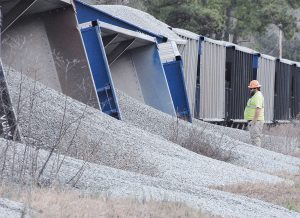 Three locomotives and 26 cars were ahead of the point of derailment on Corman track about a mile south of Allsbrook, and were separated from the overturned cars at about 10 a.m.

Clean-up crews arrived minutes later, about five hours after the derailment. There were no cross-streets involved, and beyond the need to limit traffic to one lane no apparent need for a detour.

An RJ Corman official on site said a corporate spokesperson would provide comment on the derailment, though it was not clear how quickly that might happen.

Gravel was spilled from six cars that completely left the track, leaning towards the highway. A seventh car was leaning in the same direction, but its highway side wheels were still on the track.

Equipment and ties for track repair arrived about 11 a.m. It was not clear how long the track might be closed.

Look for more on this story here, as events warrant, and in the next Tabor-Loris Tribune in print and online.