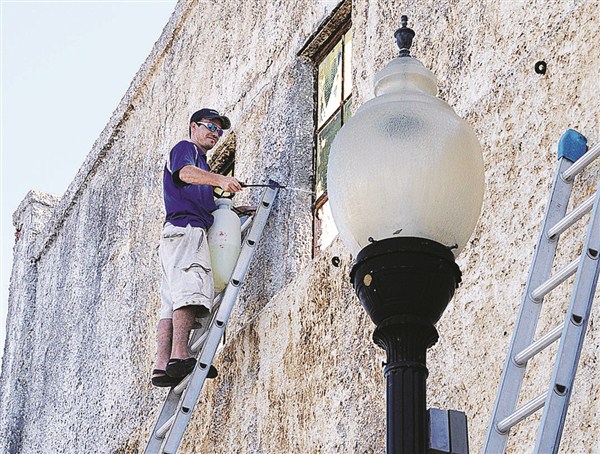 Dustin Ryman of Southport based Pristine Pressure Cleaning applied chemicals Monday morning as part of the process to restore the former Ritz Theater in downtown Tabor City. A new coat of paint will go up as part of Tabor City’s Paint the Town project on Sept. 8. 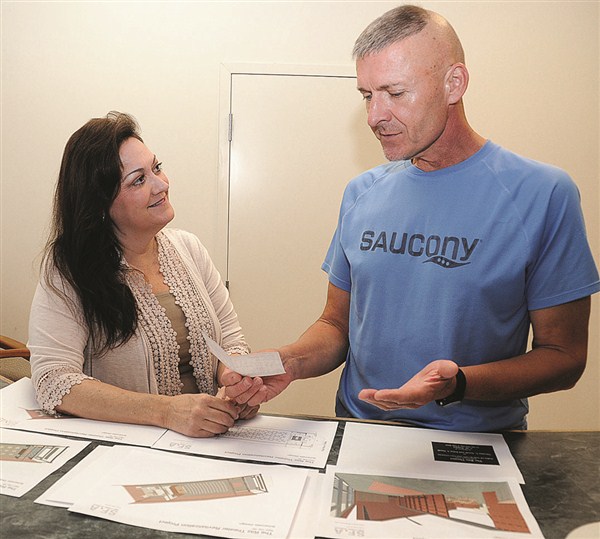 Byron Fowler doesn’t forget the well known fast-food legacy his father, the late C.M. Fowler, still enjoys in Tabor City.
Perhaps less widely known, C.M. Fowler once operated the old Ritz Theater, a fact not lost on Tommy and Edna Small, who have given the property where audience roars to Bruce Lee action films once echoed through the streets to town government.
Byron Fowler last week presented the largest individual donation yet to the Ritz Challenge, a check for $2,500 in the name of his parents, C.M. and Margaret E. Fowler, for a project to rebuild the old building and give it new purpose as a community center.
Byron made the presentation to Dianne Nobles Ward, the town’s Promotions Director, at the Tabor City Visitor Center.
Byron said he’s also purchased $250 worth of brick pavers, part of a companion fund raising effort for the Ritz.

News to him
A story in the Aug. 15 Tabor-Loris Tribune broke the news to Byron that the Small’s had chosen to honor C.M. Fowler through their gift, and that a plaque was to be placed in the restored structure, right next door to the restaurant that still bears his name, Fowler’s Grill.
For many in the community, the restaurant C.M. Fowler sold well before his death in 2010, still has a different name: simply “C.M.s”.
“That was something,” Byron said. “I had no idea until I saw it in the Tribune.” Byron said he and other surviving family members were “very touched” by the Small’s gesture. One of the eight brick pavers Byron purchased last week was in the name of Tommy and Edna Small.

Taking up the challenge
A photo in that Aug. 15 newspaper showed Mayor pro tem and retired school teacher Miona Fonvielle presenting a Ritz Challenge check, which has prompted a response from a student from Tabor City High’s class of 1970, Ward said.
Jaey Young, as a result of the story and photo, has made his own Ritz Challenge donation, Ward said, with a note to his former teacher.
“Please advise Mrs. Fonvielle that I have accepted her challenge,” Young wrote. “Other graduates of 1970 are encouraged to donate.”
Others who have taken up the challenge, and made donations, include Rod and Donna Sanders, Dan and Annette Sanders, Burnett and Mary Coleman, Mike Graham, Stephen and Joanne Lynch, Clarence and Mildred Willoughby, Sterline and Caroline Koonce, Linwood and Sheila Cartrette, Al and Suzette Leonard, Rusty Carter, Houston Watts, Fred Jernigan III, Gene Burroughs Jr., the Huggins family, First Community Bank, Richard and Margo Wright, Tabor City Civitan Club, The Lewis Sikes Foundation, the Young family, Nelson and Jeanene Lee.
To make a Ritz Challenge donation, contact Ward at the Tabor City Visitor Center.
To purchase Ritz pavers, $30 each or two for $50, contact Dixie Turbeville, Bruce McPherson, Wallace Clontz or Greater Tabor City Chamber of Commerce Executive Vice President Cynthia Nelson.

Underway
A crew from Pristine Pressure Washing was at the Ritz Monday, preparing the facade for a paint job in advance of a new metal building to be constructed on site beginning next month.
That’s just the first step, as the town and supporters seek grant funds they hope to use to enclose the building, to provide a kitchen and bathrooms, and make it a facility the community can use and take pride in.
“There will be a stage, room for tables, or auditorium seating,” Ward said. “It can be used for plays, musical performances, receptions, all sorts of uses.”
Initial work should be finished in time for this year’s North Carolina Yam Festival in late October, Wards said. If grant funds come through, the building could be ready for productive use in time for the 2013 sweet potato celebration.