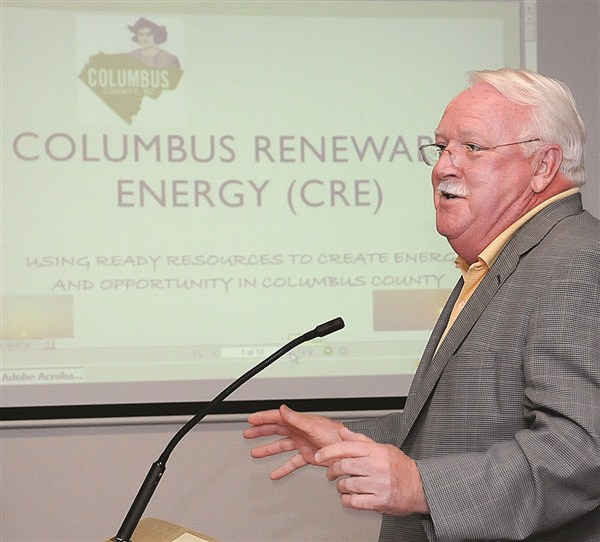 A proposal to build a wood fired electrical generating plant that would use methane gas from the old Columbus County Landfill brought a cautious endorsement from county commissioners on Monday.
Commissioners authorized Columbus Renewable Energy, LLC (CRE) to continue the planning process its president, Cy Jamison, said began a year ago, while instructing county staff to explore the project and those associated with it.
Jamison served as Director of the Bureau of Land Management, a division of the U.S. Department of the Interior, from 1989 to 1993.
Jamison, a Montana native, said he became interested in developing a project in Columbus County because of his support of the Boys & Girls Home school at Lake Waccamaw. Within 50 miles of Whiteville, Jamison said he found 1.2 million tons per year of available wood, that could be converted to wood chips, to fire an electrical generating plant that would require about 150,000 tons of waste wood annually.
Using methane gas already being captured from the former landfill, Jamison said a 10-megawatt electrical generating plant could be sold profitably into the electrical grid. Existing electrical substations within two miles of the landfill help to make the project financially feasible, Jamison said.
Construction costs are estimated from $22 to $26 million, Jamison said, with annual operating costs pegged from $2.3 to $2.6 million. Jamison said the facility would create five good paying jobs, and generate steam that could be used by greenhouses operated by Southeastern Community College at the landfill.
For more on this story see the Sept. 19 Tabor-Loris Tribune print edition.