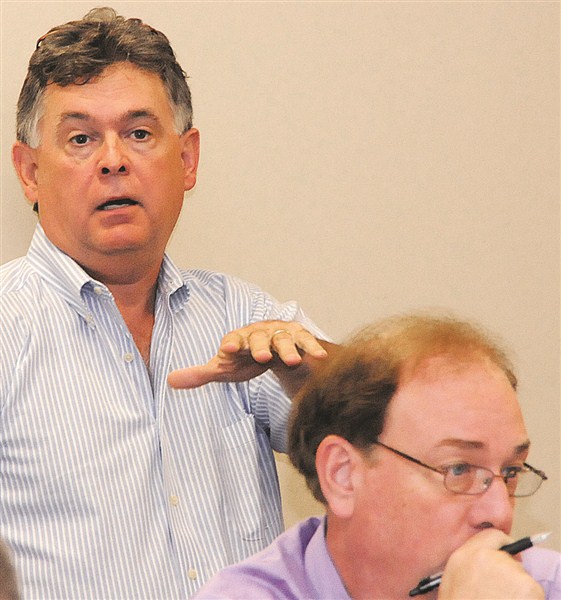 Elected leaders from Columbus, Horry and Marion counties will lead efforts to get the Carolina Southern Railroad back on the rails, a gathering that also included appointed officials and business representatives concluded Monday.
Dubbed the Interstate Railroad Committee, the group hosted by the City of Loris in its new Public Safety Building appointed Myrtle Beach Regional Economic Development Commission chairman Doug Wendell and Tabor City attorney Dennis Worley as co-chairs.
County governments were all represented, and numerous municipal leaders were. County government chairs were asked to appoint two people to sit on the committee, with one each from municipalities, with the goal of meeting to begin the earnest work on Oct. 8.

Industry’s need
Business along the line that stretches from a CSX hub in Mullins, through Fair Bluff to Chadbourn, then turning south to Tabor City, Loris, and Conway before heading east for Myrtle Beach, needs the railroad. A spur also connects Chadbourn and Whiteville.
Its economic impact was detailed in an April report prepared by Coastal Carolina University Professor Henry Lowenstein, Ph.D. for the Myrtle Beach based economic development group.
More than 800 jobs in Horry County alone are impacted by the lack of rail service, Lowenstein said Monday, and heavy freight carried on the more efficient tracks reduces the strain on overburdened highways.
Current rail cars carry the freight of four tractor-trailer trucks, Lowenstein said, and new federal regulations will allow for bigger rail cars.
That’s big money for company’s like Atlantic Corp. in Tabor City, spokesman Lex Johnson told the group Monday. From 400,000 to 500,000 pounds of paper is converted to a variety of products at Atlantic daily, Johnson said. Before Carolina Southern ceased operation, almost all of that was brought in by rail, most from Louisiana.
Trucking is much more expensive.
“It is costing us a lot,” Johnson said.
Likewise for Idaho Timber in Chadbourn, which chose to locate there because of the rail line, and its proximity to the State Port in Wilmington, without the higher cost of locating closer to the port, manager Jim Bowen said.
“We’re playing the hand we were dealt,” Bowen said. “But we need a new dealer.”
Georgia Pacific’s Chadbourn operations, idled as the economy soured in 2009, is on a list of plants the company could re-open as demand for wood products improve, Lanier said.
Without rail service, Georgia Pacific could permanently shutter the plant, which would provide 486 jobs if opened and at capacity.

Pippin problem?
Owned by the Ken Pippin family, Carolina Southern Railroad has been idle for more than a year, after it failed bridge and track inspections conducted by the federal regulators. Efforts to secure a $12.8 million federal Department of Transportation grant to make rail repairs failed in July.
Weaknesses in Carolina Southern’s grant applications, said Columbus County Economic Development Director Gary Lanier, was a lack of detailed financial information from the railroad, and the absence of matching money from South Carolina government.
Carolina Southern has been turned down by the Federal Railroad Administration’s Railroad Rehabilitation and Improvement Program and twice for TIGER grants from the U.S. Department of Transportation. Turned down for the RRIP grant, Pippin called further efforts there “a waste of time,” Lanier said.
Carolina Southern’s TIGER III grant was denied last December. Horry County government submitted a TIGER IV grant application on behalf of Carolina Southern in March. It was also not on the funding list released in June.
Gary Loftus, an Horry County Council member and Director of the BB&T Center for Economic and Community Development at Coastal Carolina University, was blunt in his assessment of the problem.
“As long as the Pippins are involved nothing is going to happen,” Loftus said.
The Pippins, Loftus said, have invested little in the railroad. New ownership and leadership is needed to save it, he said.
Pippin, on Tuesday, said Loftus’ comments caught him by surprise.
“I never heard any of that,” said Pippin, who was asked not to attend the meeting. “The only thing I’ve ever heard from Horry County Council, they’ve been supportive, they’ve applied for grants. I’m just not familiar with those complaints.”
Assistant Horry County Administrator Steve Gosnell said Carolina Southern owes county government $150,000 in lease fees for 14-miles of county owned rail serving Myrtle Beach.

Moving on
Pippin said he is seeing signs that South Carolina government is growing more interested in rail service, and he’s hopeful that the group organized Monday can help get his railroad running again.
He dismisses those who say taxpayers shouldn’t help support privately owned railroads.
“When BMW came to South Carolina, they built an entire interchange for them,” Pippin said. “That was the right thing to do. We need that plant.
“South Carolina has just been so involved with highway needs that it hasn’t looked that much at railroads. That’s changing.”
State Sen. Cleary backed establishment of a new division at the S.C. Department of Transportation that is looking closely at rail issues and needs, Pippin said.
That’s a positive step, Pippin said. So is the committee that organized in Loris Monday.
“I really appreciate that involvement,” Pippin said. “I’m just very encouraged by that group of folks, it’s a group of people who like to make things happen.
“I think the situation with the railroad is that it’s been here about 160 years. We happen to be the temporary custodians of a permanent piece of infrastructure. Hopefully it will be here for another 150 years.”