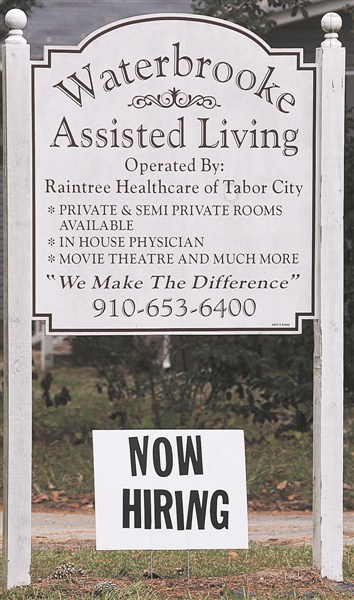 State regulators have received a formal response and plan from Waterbrooke Assisted Living, an adult care facility in Tabor City, in response a notice from the NC Department of Health and Human Services stating the state’s intent to shut Waterbrooke down.
Just what that response says isn’t yet known. DHHS spokesman Jim Jones late Monday said officials in DHHS’ Adult Care Licensure Section will conduct a “thorough review” of the document before releasing it.
In the meantime, Waterbrooke officials have put “Help Wanted” signs out on U.S. 701 Bypass, and at the main entrance on Elizabeth Street.
Waterbrooke received a scathing report from DHHS investigators last month, as investigators descended on the facility. That story is here.