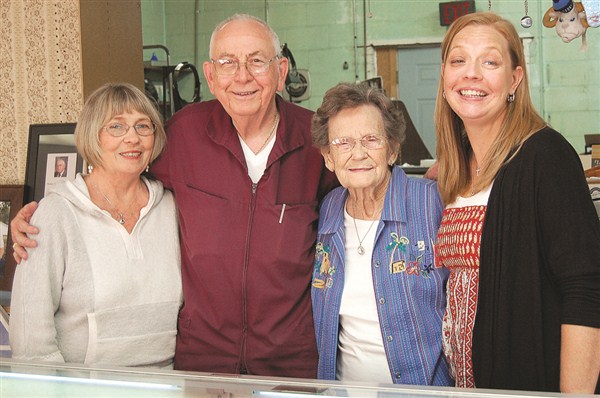 Members of the Williams Jewelers team eying the end of the line for the 32-year-old business include (from left) Jenny William, Guy Williams, Vera Leigh and Betsy Williams Todd. Not pictured is Ilene Smithart.

It’s the end of the line for the last of the Tabor-Loris Community’s hometown jewelry stores, as Williams Jewelers eyes a Christmas Eve closing after 32 years in business.
It’s the end of an era for owner Guy Williams, who bought the store from Clyde Richardson in 1980, and for his veteran staff.
“When I bought the store, Vera came with it,” Williams said.
Vera Leigh worked for Richardson at the time of the purchase, and remained at the store. After decades together, Williams said his staff is like family. Ilene Smithart has worked for Williams for more than 20 years.
“I use to wear Ms. Vera’s square dancing outfits at Halloween,” said Williams’ daughter, Betsy, who was 7 years old when he purchased the store. “I watched her grow up, and she was a precious child” Vera said.
Williams has already begun clearing out the stock with rock bottom prices on everything in the store, including the fixtures and counters, which have already been sold.
“Everything must go,” Williams said.
Retirement may beckon, but Williams said he has yet to make any plans, except to spend more time with his wife and friend, Jenny.