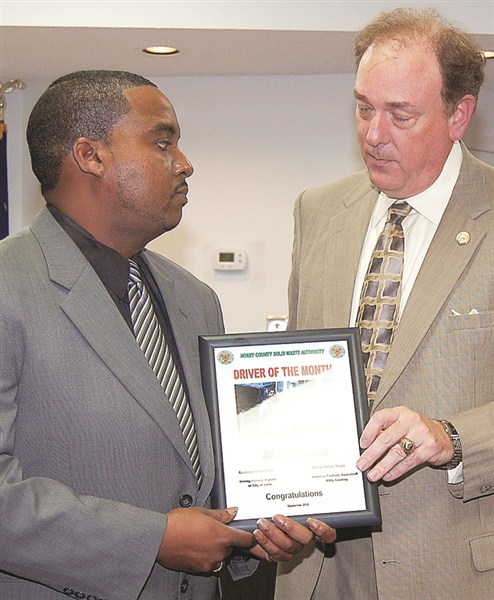 Code enforcement
Efforts are underway to notify property owners in violation of city law concerning property upkeep, Code Enforcement Officer Mike Haggie told council.
Letters to owners of property in need of upkeep or with dilapidated buildings that need attention were mailed on Oct. 23, Haggie told council. So far he’s heard from 17 property owners, about half of those sent letters.
Those who don’t respond will be sent certified letters, Haggie said. Failure to respond to the certified letter within five days of receipt will be fined $500, he said, and the city will begin addressing the problem, removing trash, taking down buildings, whatever it takes, with the cost to be applied to the tax bill attached to that property.
Haggie asked that code enforcement action be delayed until after Thanksgiving.

Hurricane plan
A recent evacuation study completed by FEMA and the U.S. Army Corps of Engineers shows weaknesses in evacuation clearance times and a disturbing lack of available shelter capacity, Horry County Emergency Management Director Randy Webster told council.
Using numbers from the 2010 Census, current road information and improved storm surge modeling from the National Hurricane Center, the study was the first of its kind since Hurricane Hugo in 1989.
There are three fewer shelters available in Horry County now than 23 years ago, but there has been no decline in need, Webster said.
Shelter capacity was 47 percent below the potential need in 1989, Webster said. Today that deficit stands at 78 percent, a 31 percent increase.
Planners at all levels of government are working to address the documented needs, Webster said.

Water bills
Carol Fitzhugh, property manager for Tall Pines Apartments, told council that some recent water bills there have been extremely high, possibly in error, and that there was a dispute with the city regarding a dumpster.
City officials were previously forced to return $7,000 because of overcharges for services, Fitzhugh, said. Tall Pines is being charged for one dumpster that is not there, she said.
Public Works Director Rodney Hardee was not present at Monday’s meeting, and Mayor David Stoudenmire asked that Fitzhugh talk with the city attorney, Carroll Padgett, about her complaints.

Other business
In other matters, council last week:
•    Heard from Debra’s Place owner Debra Brown, who said someone from the city was supposed to contact her after the October council meeting to talk about cleaning up property behind the store. Stoudenmire instructed brown to contact John Brown with the city’s Public Works Department.
•    Heard a report from council member Mike Suggs on efforts to help Carolina Southern Railroad return to service. The bottom line, Suggs said, is that the railroad does not have the money to bring the tracks up to federal standards, and that a group representing Horry, Columbus and Marion counties – those impacted by the railroad shutdown – are trying to figure out a solution.
•    Heard the mayor express his deep appreciation to the Loris Chamber of Commerce for a successful Bog-Off Festival, thanking them for their efforts. Stoudenmire said thousands visited the city on Oct. 20, and that he hopes many will return and shop in Loris.
•    Heard from Chamber of Commerce representative Samantha Norris on scheduled holiday events, including a Christmas parade on Nov. 30, with a tree lighting to follow. Christmas on Main plans, and possible times were discussed, as was a holiday display contest, with details to be announced soon.
•    Watched as city worker Adrian Hazelton was given a Driver of the Month Award, issued by Horry County Solid Waste Authority and presented by the Mayor. A city worker for four years, Hazelton was honored for outstanding performance on the job, devotion, and dependability.