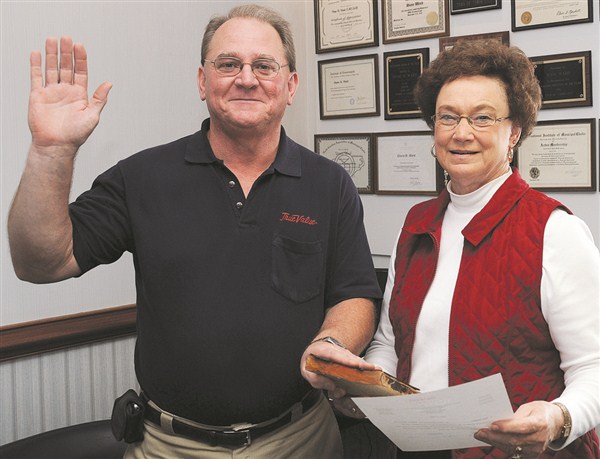 Sam Rogers, in a practice run for his expected swearing in as a member of the Tabor City Council later this week.

Sam Rogers, who ran unsuccessfully for a seat on the Tabor City Town Council in 2011, is expected to claim that seat on Friday.
That was expected to happen Tuesday, but illness among council members forced a rare cancellation of council’s regular monthly meeting.
Council is expected to meet at 8 a.m. Friday at Town Hall, and expected to appoint Rogers to the seat vacated by Trent Burroughs, who was sworn last week to the Columbus County Board of Commissioners.
Burroughs was the top vote getter in 2011, while Rogers finished third in a four-candidate race won by incumbents, including council member Miona Fonvielle.
Fonvielle and other members of council encouraged Rogers to accept the appointment to Burroughs’ seat. He will have to face voters next November if he is to keep the seat for more than a year.
Rogers agreed to pose for a photograph Monday, a practice session for his expected swearing in Friday.

Servant
“I want to help the community,” Rogers said of his decision to accept appointment to the town council. “I know there is probably a lot I don’t know, that I’ve got to learn, but I think I bring some experience that will be helpful.”
Rogers said he brings no agenda to council.
“I’m just looking at learning and doing the best that I can at working with these folks who are already there, and helping to make decisions that keep Tabor City going down the proper path.”
Will Rogers seek election next November?
“At this point, I would say yes,” Rogers said. “It depends on how some things go.”

Background
A son of Paul and the late Caroline Rogers, Samuel James Rogers is a 1974 graduate of Tabor City High School, where he played football for legendary coach Jack Holley, and was part of the heartbreak team that lost state championship game to mountain visitors from Sylva-Webster.
He attended Coastal Carolina University in Conway, graduating with a BA degree in 1979. That degree prepared Rogers, now 56, to be a teacher.
Instead, he returned to the family hardware business, W.F. Cox True Value, owned by his father, Paul Rogers Jr., and earlier by his grandfather, A. Paul Rogers Sr.
“I always thought that I might possibly pursue the other,” Rogers said of his education.
That was not his destiny. Growing up at the store, Rogers said he put together bicycles and handled a number of jobs in his youth.
With a servant attitude that seems a family trait, Rogers has been a member of the Tabor City Rotary Club for years. Like his father and both grandfathers, including the late Samuel L. Jackson, Rogers has been a Rotary president. He was named a Paul Harris Fellow, Rotary’s highest honor, in 2009.
A lifelong member of Tabor City Baptist Church, Rogers is a Deacon, has served as a Sunday School teacher, and is currently general secretary for the church.
His siblings include the late A. Paul “Sandy” Rogers III, John Rogers of North Myrtle Beach, and Paula Wagoner of Lake Waccamaw. Rogers and wife Debra Joyce have two adult children, Carol Annette Rogers of Little River and John Paul Rogers of Tabor City.