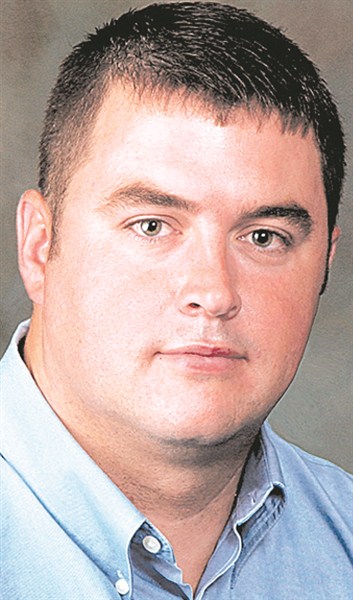 Mitchell Ward abruptly ended his seven-year tenure on the Tabor City Town Council Friday morning, with his letter of resignation accepted during a rare re-scheduled meeting.
Ward’s resignation came as Sam Rogers was sworn as council’s newest member. Rogers’ who had finished third in a race for two council seats in 2011, succeeds Trent Burroughs, who resigned after being elected a Columbus County Commissioner.
Ward was not present for the meeting. Mayor Royce Harper read Ward’s letter of resignation, which he received late Thursday.
“It has been a pleasure serving the citizens of Tabor City for last seven years,” Ward said in the letter. “I sincerely appreciate your support and regret that I can not fulfill my term.”
Ward, in the letter, offered no reason for the decision. He later said business and personal challenges prompted him to step back from council. Ward is the owner of Inman Funeral Home.
“I’ve got a lot going on,” Ward said. “Mama is sick, she had surgery and is in extended care, and the business has been busy.
“It was fair for me to step back and let somebody else who has the time do the job,”
“He was a good councilman,” Harper said of Ward. “I haven’t spoken to him, but he did a good job.”
Town Manager Al Leonard said he was asked to pick up a letter at the funeral home Thursday afternoon, and that a secretary told him the sealed envelope contained Ward’s letter of resignation. Leonard said he delivered the envelope, still sealed, to Harper.
Council met Friday after illness among several members forced a rare cancellation of their regular monthly meeting on Tuesday. Council members accepted the resignation, and took no action on a successor.
“Several people” had inquired about the vacancy created by Burrough’s resignation, Harper said. Council may choose from one of those people to fill Ward’s seat.
Harper said council could act to fill Ward’s seat when it meets again on Jan. 8, 2013.