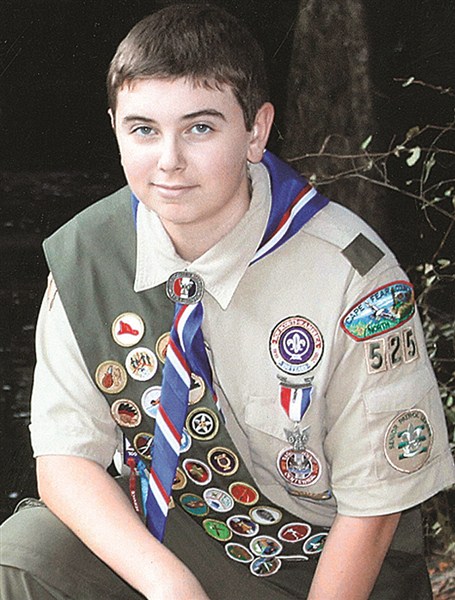 Just 13-years-old, Dylan Kerman has reached the pinnacle of Scouting well ahead of most, just about as quickly as possible.
He’s also the first Eagle Scout from Boy Scouts of America Troop 525, sponsored by Old Zion Wesleyan Church.
Humble about his accomplishments, the Nakina Middle School eighth-grader says his status as the troop’s only Eagle will be short-lived. Nathan Zima has passed his Board of Review, the final requirement for an Eagle Scout, and is awaiting his Court of Honor, Dylan said.
Dylan’s Court of Honor, where the Eagle badge was pinned by his mother, was held Dec. 1 at Old Zion.
Another member of Troop 525 is expected to achieve the Eagle rank soon. Those who follow Dylan are decidedly older, at or near the average age of 17 for Eagle Scouts.
More than two million boys have earned the rank of Eagle Scout in the United States since 2012, the BSA website says. In recent years, about five percent of Boy Scouts become Eagle Scouts.
Just how many achieve Eagle so quickly? It’s rare.

Encouraged
The son of Dan and Raquel Kerman, Dylan joined Tiger Cubs at age 6, became a Cub Scout as soon as he was old enough, earned his Arrow of Light as a Webelo, and transitioned to the Boy Scouts six months ahead of the traditional age of 11 for joining.
Dylan credits his grandfather, Lofton Cox Jr., with encouraging him to be the first member of his family to become an Eagle Scout.
“He just kind of motivated me, really,” Dylan said of his grandfather. “He wanted me to get it real quick.”
Real quick meant focusing on merit badges that are required for the Eagle rank early, saving some less tough, or just more fun, for later in the process.
Environmental Science falls into the “least favorite” category for Dylan, a merit badge that required perseverance to obtain.
“It was basically like a science class in the summer,” Dylan said.
Dylan said he started working on the project before summer camp at Camp Bowers in Bladen County, essentially started over at camp, and finished up with a required habitat study after returning home.
“It was a lot of work,” he said.
Most fun, and certainly most interesting, Dylan said, was earning his Aviation Merit Badge.
“I got to pilot an airplane,” Dylan said. “Milton Ward took me up and taught me a lot. It was fun.”
Ward, a retired military fighter pilot who now flies commercially for Piedmont Airlines, offered his time and flight time in his personal aircraft for Dylan’s merit badge effort.

Lifesaving
First Aid qualifies as the most useful merit badge for Dylan. Its’ required for an Eagle, and one he put to use in a life-or-death situation that involved his great-grandfather, Howard Lofton Cox Sr.
“He appeared to be having a stroke,” Dylan said. “He had the signs and symptoms. I crushed up an aspirin and gave it to him.”
Lofton Cox Jr. loaded his father in a family vehicle, and with Dylan rushed the elder Cox to McLeod Loris hospital, where he was able to recover from his sudden illness.

Leadership
Scouting emphasizes leadership training. Dylan has taken that to heart, filling numerous leadership roles at Troop 525. He’s been a Chaplain Aide, Patrol Leader, Senior Patrol Leader, and Order of the Area Troop Representative.
Troop leaders expect Dylan will serve soon as Junior Assistant Scoutmaster. As an adult, Dylan said he hopes to serve as an assistant scoutmaster.
He’s also been recognized by his peers at Troop 525, selected for the Order of the Arrow, the national honor society of the BSA. He finished his weekend ordeal, with its focus on American Indian-styled traditions and ceremonies, in September.
For his Eagle project, a requirement for the rank, Dylan organized an effort to install 25 smoke alarms in homes in his neighborhood, mostly along Howard Cox Road in the Guideway Community. He credited Tabor City Fire Department Chief Jerry Hodges with his help for the project.
Smoke detectors were purchased with funds raised by Dylan and his fellow Scouts as part of the project. Leftover smoke detectors were given to the Tabor City department for distribution within its fire district.

Future plans
Dylan can be forgiven if he hasn’t firmed up his post high school plans. He’ll be a freshman at South Columbus High next year.
He does have some thoughts on the topic.
“I want to do something in law enforcement,” Dylan said. “Maybe fish and game, but there’s not much money there.
That fits nicely with his hobbies, which don’t involve organized athletics.
“I’d rather go fishing and hunting,” Dylan said. “I love doing anything outdoors.”