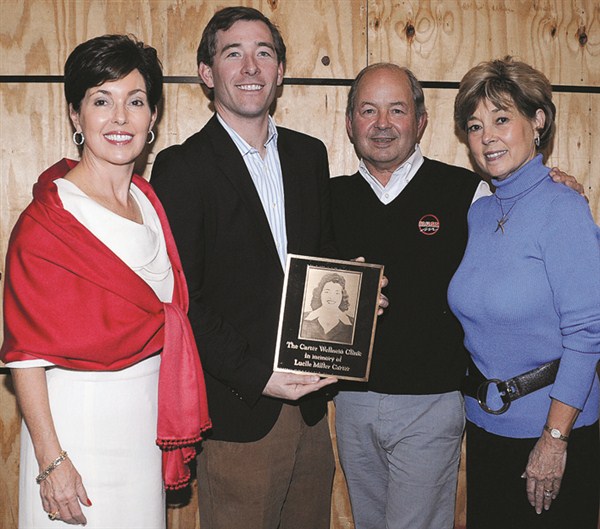 A new wellness clinic for Atlantic Corporation’s Tabor City operations was dedicated Thursday in memory of Lucile Miller Carter, who with her husband the late W. Horace Carter founded this newspaper and the much larger company that followed.
Wes Carter, a third generation corporate leader, grandson of the founder, and son of Atlantic President Rusty Carter, announced the dedication during the company’s annual Christmas party and oyster roast.
Rusty Carter said he was taken completely by surprise, and his wife Susan said she had been sworn to secrecy. Rusty Carter’s sisters, Velda Hughes and Linda Metzger, were among the family members on hand to see the unveiling of a plaque that will hang at the Wellness Center entrance.
Horace Carter called Lucile “my first love” in a 2005 column that spoke of her death on April 19, 1982. They were married for “37 years and five months,” Horace Carter wrote. He died on Sept. 16, 2009.

Her legacy
Wes Carter spoke of his grandmother’s place in Atlantic’s history before hundreds of employees of the still growing company.
“Around Atlantic, year round we remember our patriarch, my grandfather Horace Carter, and his lasting legacy on this great company. His vision and moral compass still define who we strive to be everyday here. I find myself reflecting on him maybe a bit more this time of year, and appreciating the great man that he was.
“Today, I would also like to focus on another one of our company’s founders who many here may not remember.
“My grandmother, Lucile Carter, was truly his partner in every area of their lives including the Tribune. She pushed for the success of this little newspaper every bit as hard as he did, and was the gentle soul that balanced out the hard charging newspaper man.
“She worked at the Tribune office most everyday of her adult life while also raising 3 children and supporting her husband during his crusade against the KLAN.
“Week in and week out she figured the Atlantic payroll, billed out all of the job jackets for printing customers, and every Monday she drove to Whiteville to pick up advertising for the Tribune. Lucile sold ribbon, gift boxes and wrapping paper to shops like Colliers Jewelers, Leder Brothers, and many other merchants in the area.
“She lent a hand wherever was needed and there was no job too large or small. She was completely dedicated. She also loved to grow things and took pride in planting flowers around the newspaper office.
“Health and well-being were very important to my grandmother. She was vigilant about the health of her husband and children.
“Linda Jacobs told me a story today Lucile that I felt was appropriate:
“My grandfather was very involved in civic issues in this community and worked around the clock. The stress eventually landed him in the hospital with heart trouble.
“After he was released, the very next day another civic leader, L.B. Hedgecoe was his name, was in Horace’s office asking for his help. Lucile walked in and said:
“‘LB, get out of here. Horace just got back from the hospital and do not bother him! He needs rest!’
“Even though I was very young when she passed away, I have a vivid recollection of her caring nature and passionate concern for other people. She was truly a special lady.
“It is appropriate that her memory be honored today in Atlantic’s renewed efforts to focus on the health and wellness of our employees. Today, I am proud to officially open the Lucile Miller Carter Wellness Clinic.