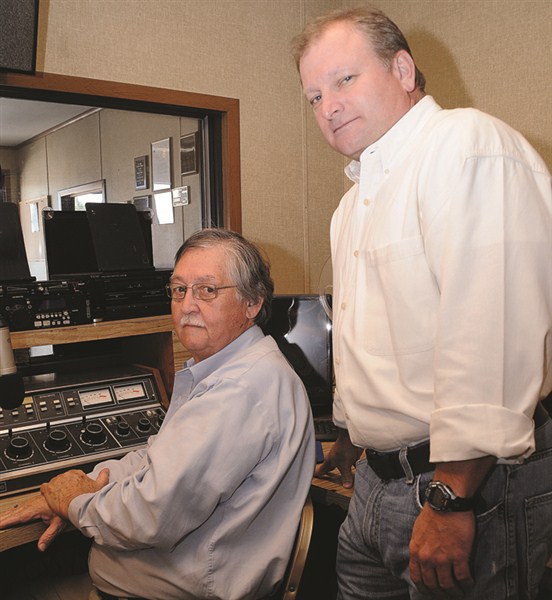 There has been a changing of the guard at WTAB radio in Tabor City, with few clues on the air as the family-owned broadcaster has entered a new era.
Eric Sellers, with his wife Julie, bought the station from Jack Miller earlier this year, with the sale finalized through Federal Communications Approval during the summer.
Julie is the Media Center director at Nakina Middle School.
Jack, voice of the popular “Swap Shop” morning broadcast, said bureaucratic red tape was more difficult to navigate than the sale.
Selling was pretty straightforward.
“Jack had decided he wanted to slow down, and he wanted to keep the station in the family.”
Eric is Jack’s stepson, the son of Jack’s wife, Bonnie.
As owner of the former Radio Shack franchise in Tabor City, Eric was also known to the business community. He said he was pleased with the opportunity to lead the station established in Tabor City in 1954.
Eric’s on-air presence has been limited, so far, to co-anchoring broadcasts of South Columbus High School football during the recently completed season. He’s working with sales, and learning the broadcast business from the veteran, Jack Miller.

Since ’75
Jack came to WTAB and its former sister station WKSM in 1975, and has seen his share of change in 37 years.
Troy McPherson was the face behind a group of investors that opened the station in 1954. He died in the mid-1970s, and Bill Benton bought the AM/FM combination station in 1976, a year after Jack, a Tennessee native, settled in behind the Tabor City microphone.
Don Curtis, then of Laurinburg, bought the station in 1980. He later sold the FM frequency, which became a Grand Strand radio station, and Jack bought the WTAB in 1995.
Selling to Eric ended 17-years ownership of the station for Jack, who quietly noted “it went by fast.”

Veteran broadcasters
Computer automation has brought some changes to WTAB. For most of its history, the station signed off somewhere around sunset, except during football broadcasts.
Now WTAB is on around the clock, carrying current country hits from 1 p.m. to 6 a.m. daily. Not only is the 1370 AM station heard locally, it’s available around the world through the Internet.
There are some variations in weekend programing, including church broadcasts on Sunday. Lloyd Gore, a broadcasting institution who began his radio career at WLSC in Loris in 1963, is on the air from 6 to 8 a.m. weekdays with classic country music, daily obituaries, and local news reports leading into Jack’s 8 to 10 a.m. Swap Shop show.
Bob Pait brings southern gospel to the air from 10 a.m. to 1 p.m. weekdays, with a dose of commentary and local obituaries.
Approaching 77, Jack’s the oldest in the building. Just 45, Eric’s the youngest. It’s Eric who seems most proud of the broadcast experience at WTAB.
“The average age of our on-air people is 71,” Eric said. “That’s amazing. Not many businesses have anyone in their 70s working.”