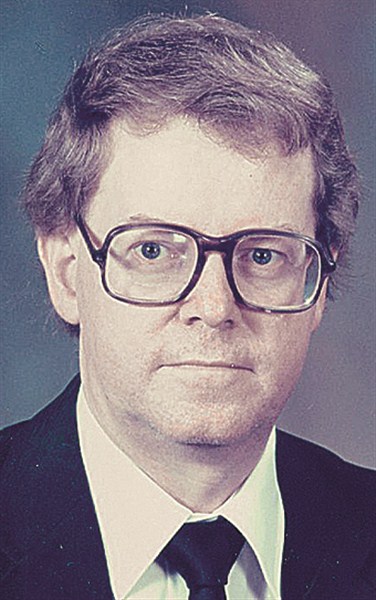 Bob Pait, in this undated photo from WTAB, likely taken soon after he joined the station in 1985.

Robert Douglas “Bob” Pait Sr., a gospel music host for Tabor City radio station WTAB for 27 years, died Tuesday morning and was badly burned in a fire that heavily damaged his Kings Road home south of Brunswick, Assistant Columbus County Corner William Hannah said.
Investigators spent much of Tuesday inside the gutted single-story brick home off of NC 130 south of Brunswick, and have tentatively ruled the fire’s cause “undetermined with no suspicion of foul play,” Columbus County Fire Marshal Scott Merritt said.
An autopsy to be conducted Wednesday should determine the cause of death, Det. Jeff Nealey of the Columbus County Sheriff’s Office said.
Pait’s body was found face-down in the living room floor, Merritt said. His namesake son, Robbie Pate, had escaped the fire and shouted at responding members of the Brunswick Fire Department to go after his father.
Robbie Pate was uninjured, and told investigators he thought his father was behind him as he fled the flames.
Fire filled the home as firefighters responded to the 5:08 a.m. alarm, Merritt said. Fire began in a small storage room and den where Robbie Pait, who lived occasionally with his father, often slept.
Pait had been employed at WTAB since 1985, fellow broadcaster Lloyd Gore said.
“He trained me when I went to WENC,” Gore said. “That was in 1985. He came to WTAB that same year. He was a really good guy.”
Pate played gospel music from 10 a.m. to 1 p.m. weekdays, and was the voice of on-air obituaries broadcast by the station, owner Eric Sellers said.
Check back here for more on this developing story, and see the Jan. 9 Tabor-Loris Tribune for the full story.