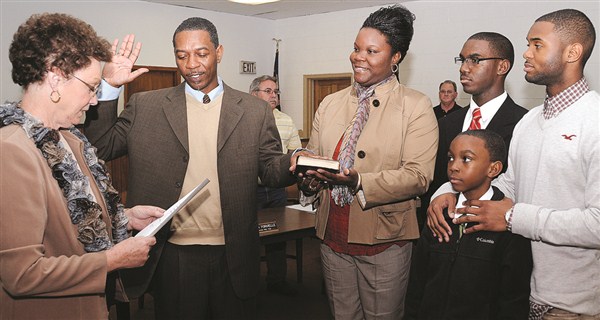 With Town Clerk Diane Ward administering the oath (from left) Lamont Grate is sworn as the newest member of the Tabor City Council on Tuesday with support from wife Lashawn Graham Grate and their children Christian, Treshawn, and Rashawn.

Tabor City’s newest Town Council member was sworn into office moments after his unanimous appointment Tuesday night.
Lamont Grate, 39, fills the vacancy created by Mitchel Ward’s resignation last month. Grate’s appointment was clearly popular, with the crowd almost overflowing the District Court Building.
Grate, accompanied by his wife and children as he took the oath, is the second African-American ever to serve on council. He follows the late George Bryant who served a total of 16 years on council in three stints from 1977 to 1995.

Youth leader
While Bryant’s path to council came through service on the town’s original Planning and Zoning Board, Grate has had an impact with youth and parents through his involvement with local recreation.
“I’ve been involved at Parks and Recreation for 13 years,” Grate said earlier Tuesday. “I’ve been dealing with youth on a lot of stuff. Dealing with parents, too. I just thought it was important to instill something positive in the youth.”
Grate said he’s met “some great parents” through his recreation work, including his service as President of the South Columbus Dixie Youth board for several years.
Laughing, Grate said he was pressed into the Dixie Youth leadership role.
“They kind of picked me,” Grate said, “and said ‘you’re a politician.’ I think they meant that on a good note.”
Grate spoke well of council as he prepared to join it.
“They’ve got a great board,” Grate said. “I am honored that they even considered putting me there.”

Election
Grate’s term will expire this year, and he will have to seek re-election if he wants to remain on council beyond 2013.
Right now, Grate said he will focus on learning the job. On running for election in November, Grate said “We’re looking in that direction.”
It could be a crowded ballot. Councilman Sam Rogers, appointed just last month to fill the seat vacated by Trent Burroughs’ election as a county commissioner, will also have to face voters in November if he is to continue to serve.
Councilman David Mincey’s term also expires this year.
With all but one council seat up for grabs this year, one of those elected will get a short, two-year term to restore the normal rotation to those offices, Mayor Royce Harper said.
Tabor City will seek local legislation this year to allow the third-place finisher in this year’s council election to serve two years, those placing first and second to win four-year terms, Harper said.

Family
Grate is the son of James “Wink” and Linda Grate. Wink is well known in the community for his work with local youth.
Married to the former Lashawn Graham, the Grate family is rounded out by sons Rashawn, 21; Christian, 17; and Treshawn, 8.
Grate has been employed by Summer Home Furniture in Shallotte for ten years.