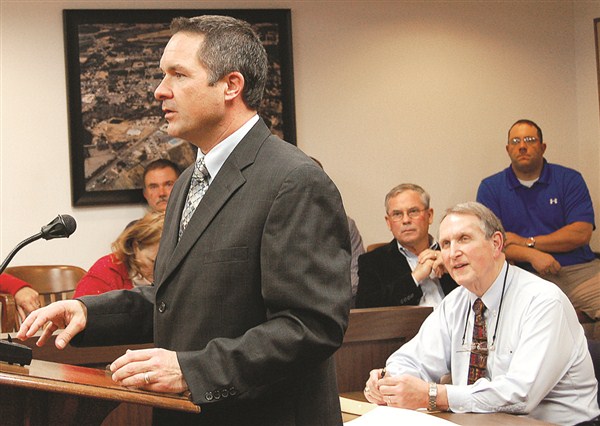 Adoption of a new $4.3 million budget and an introduction to Horry County’s new solicitor were highlights of the first meeting of the Loris City Council of 2013.
Chamber of Commerce updates and a quick display of the city’s newest fire truck also took place during Monday’s meeting.

Budget
Taxes hold at the 2012 rate of 111.7 mills under the budget plan adopted by council, though residents will notice a slight increase in monthly garbage collection bills.
New spending for the year will include cost of living and merit raises for employees, and new equipment.

Solicitor
Jimmy Richardson, appointed by Gov. Nikki Haley to fill the seat vacated by Greg Hembree, now serves as solicitor for the Horry-Georgetown 15th Judicial Circuit. He was introduced by councilman Mike Suggs.
An Aynor native who still lives close to that community, Richardson said he routinely meets with police chiefs throughout his district on a regular basis to work on problems and seek solutions.
“Sometimes we have adverse situations, but no one ever gets mad, we really leave liking each other,” Richardson said. “We all are working towards the same goal, to solve problems for all the areas.”
Loris has its own set of problems, some unique, because it is a “border town,” Richardson said. Some Columbus County residents who visit Loris complicate drug problems faced by the Horry County city, Richardson said. Repeat offenders will be getting special attention from his office, he said.
“We can’t solve all the world’s problems, but Loris has a great police department and a strong, supportive city council,” Richardson said.
City attorney Carroll Padgett called Richardson a good choice for solicitor, and called him “a fine person, a great lawyer, and a hard worker for the people of Horry County.”
Mayor David Stoudenmire said that it was good to know that someone from a more rural area of Horry County was the solicitor, and that Loris was proud of him and appreciates him.
Richardson said anyone may contact him with questions or concerns. His phone number is 843-915-5460.

TAN, and more
Council on Monday also:
•    Authorized borrowing no more than $200,000 in 2013 on a Tax Anticipation Note (TAN). It’s been five years since cash flow worries forced the city to use the TAN to pay its expenses before tax bills went out, but council routinely approves authorization in case of an emergency.
•    Received an invitation to the Loris Chamber of Commerce annual banquet from President Darlene Munn. Scheduled for Jan. 24 at The Center for Health & Fitness. Tickets are $25.
•    Heard from both Munn and chamber assistant Samantha Norris on the need for improvements to some city sidewalks, which have been damaged by tree roots.
Mayor Stoudenmire also thanked the chamber for all of their work during the Christmas season.

Fire truck
Funding for a new fire truck is in the budget approved by council Monday. After council adjourned, Stoudenmire teased Fire Chief Jerry Hardee because he had not seen the new truck, which has already arrived.
Hardee quickly resolved that issue by going to the fire station and bringing the new fire truck to City Hall for full inspection by council members and others.