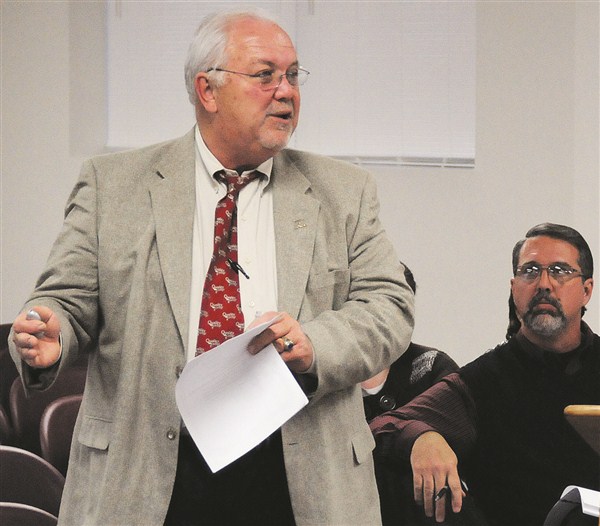 Merging Columbus County’s five rural water districts would require rate increases in all but one, and that might not balance their books, county commissioners were told Tuesday.
A merger as currently proposed, closing the books on federal loans that launched each district in favor of bank financing that promises significant long-term savings, would come with smaller short-term benefits, Public Utilities Director Kip McClary said.
“Graduation” from US Department of Agriculture Rural Development loans, the backbone of the county’s water system, could close the door on future federal help for county utility projects, consultant Rodney Tart told commissioners.
Rural water systems across the country, including those in Columbus County, have been built with a combination of low-interest loans and grants, Tart said.
USDA projects are designed to assist areas that can’t afford market rates for infrastructure, providing “the best way to get loans with no credit worthiness,” Tart said. “The U.S. Government was willing to take that risk.”
Closing the older USDA loans for lower interest, shorter-term bank loans currently available, would put the county at “a very high risk of losing the ability of getting other loans and grants from that agency,” Tart said. “My advice, don’t close the door on any financing option.”

Merger finances
Annual budgets for county’s five water districts, combined, total $2.85 million, including nearly $1.3 million in loan payments, McClary said.
USDA loans for the districts, created between 1995 and 2010, all have 40-year terms, McClary said. Interest rates for the loans used to create water district 4 are lower than currently available commercial loans, so the county should not consider paying off that in a district consolidation effort, he said.
Borrowing money to pay off loans in the other four districts, with a 25-year payoff, would cut about $61,000 in annual loan payments, McClary said.
That wouldn’t be nearly enough to offset property taxes in districts 2 and 3, which don’t generate enough money on their own to pay their bills, McClary said.
Tax revenues in those districts bring in $467,000 per year.
Connecting districts 1 and 2, an project now underway, will allow the county to stop buying water from Tabor City for district 1 and should generate about $150,000 per year for the system, McClary said.
Water sales to new county customers in the former Chadbourn Rural Water Association will bring in another $30,000 per year, McClary said.
That still leaves a $215,000 budget shortfall if the districts were merged, and the property taxes abolished in districts 2 and 3.
Water rates were raised by $1 for the first 2,000 gallons of water, and by $1 for each additional 1,000 gallons, in district 4 this year, McClary said, staunching red ink that had begun to flow there.
Matching that increase in the rest of the county’s water districts would generate about $141,000 in new revenue, McClary said. That would still leave a $74,000 shortfall.
Commissioners suggested longer terms on new financing, up to 30 years instead of 25, as a way to lower annual loan payments and overcome budget shortfalls.
But county finance director Bobbie Faircloth told commissioners late last year that banks were not likely to finance the water districts for more than 25 years. She was not present for Tuesday’s meeting.

Workshop
Commissioners said they had plenty of questions as time ran out on a one-hour workshop headed by Tart, a veteran of public water systems, retired from Harnett County, now working for Green Engineering, LLC.
Tart, accompanied by Green president Leo Green, encouraged commissioners to define their vision for the water system, and establish a business plan to match. If asked, the Green company could help develop and implement that plan, Tart said.
Commissioners agreed to meet with Tart and Green again, but did not set a date Tuesday.