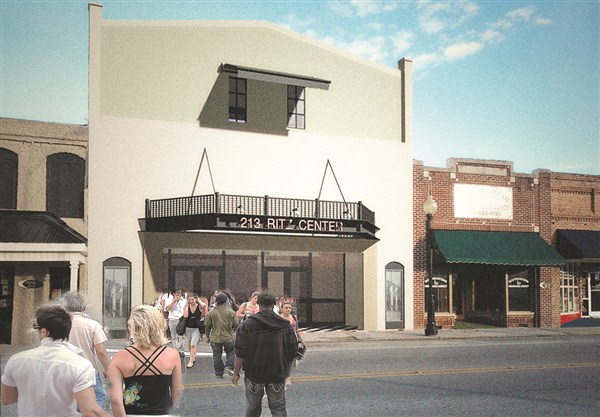 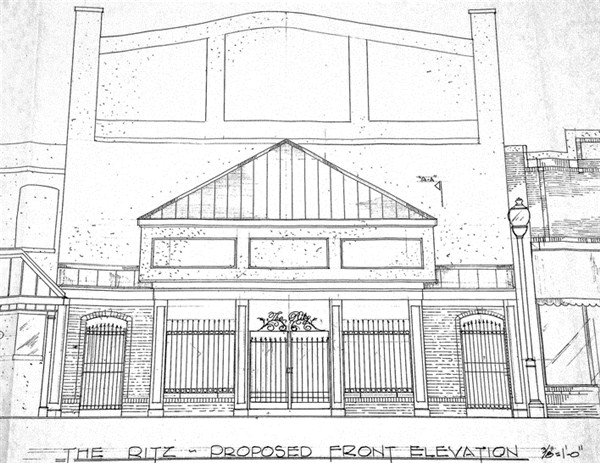 A starkly different vision for the front of the renovated Ritz Theater is revealed in a new architect’s sketch released by Tabor City’s Promotions Department this week.
Created by architect Stan Fowler, the color drawing is one of two visions for the Ritz, and couldn’t contrast more starkly to the black-and-white sketch from architect Wallace Clontz presented to the Tabor City Council last week.
Clontz’ vision, endorsed by the Friends of Tabor City, is well on its way to reality, with local welder Gene Burroughs already constructing wrought iron gates that would be prominent features of the former movie theater that’s expected to become a community events center once renovations are complete.
Fowler’s vision includes glass doors at street level, a faux balcony, and simple awning over the two upper-floor windows that are already in place.
Fowler’s second drawing will be revealed here next week.
Council members last week said they want to hear from citizens, and get their take on how the Ritz should look.

Committee formed
Key to continued renovations is a Rural Business Enterprise Grant for the project, Promotions Director Dianne N. Ward said.
A $50,000 gift from Atlantic Corp., parent company of this newspaper, was a critical part of the matching RBEG grant application. That application is now pending. Town officials should know this spring if the grant is approved.
Grant regulations require the formation of a RBEG Committee, which was formed late last year, Ward said. Members include Rod Sanders, Stan Fowler, Sonnie Graham, Nelson Lee, Donald James, Steve Lynch and Ward.
That committee has met, and members say they are optimistic about the project.
“That made us excited and we knew we were on the right track” Ward said.
Fowler’s drawing of the Ritz facade followed several weeks of work with the RBEG committee, Ward said. Committee members said the facade would compliment the interior space of the event center, which Fowler designed last summer.
“We feel like the mission was accomplished,” said former Promotions Director Steve Lynch.