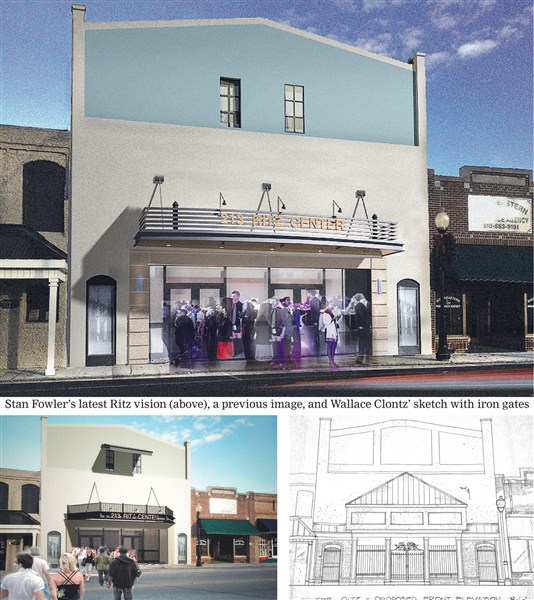 Visions for the exterior of the completely renovated Ritz Theater may be shaped by legal contract, attorney Richard Wright said Tuesday.
With a third architect’s rendering of the Hickman Road facade unveiled here, today, members of the Tabor City Council say they welcome public input before making a decision on which vision to embrace, action expected next month.
But one vision, presented to council on Feb. 12 and designed by architect Wallace Clontz, appears to conflict with restrictions contained in the Warranty Deed granting the property to The Town of Tabor City, a gift from owners Thomas Lee Small and his wife, Edna J. Small.
Signed by the Smalls on July 6, 2012, the deed seems to preclude the wrought iron gates that are central to Clontz’ vision of the Ritz facade.
Town government, the deed says, “must restore and then maintain the front and facade of the Ritz Theater Building in its original condition, or as an alternative maintain the stucco as the front and facade. The location of the doors and windows must remain in the locations as of November 10, 1992 in an effort to maintain the historical significance of the Ritz Theater Building as a landmark of Tabor City.”
Wright, in an email to Tabor-Loris Tribune, encourages the town to pay heed to the deed.
“I hope that the Town of Tabor City will review carefully the Deed, which is in its possession, and make sure that the restoration complies with the restrictions set forth by Mr. and Mrs. Small in an effort to maintain the historical significance of the Ritz as a symbol for Tabor City,” Wright said.
Town Manager Al Leonard on Tuesday said he was aware of the deed restrictions, and that he expects councils’ decision at its March 12 meeting.
Leonard also had praise for Friends of Tabor City, a private fundraising group that has embraced the Ritz restoration effort, asked Clontz to suggest a design for the facade, and has already engaged local welder Gene Burroughs to make the wrought iron gates.
“They’ve really stepped up to support the Ritz project,” Leonard said. “We appreciate that kind of civic involvement in Tabor City.”