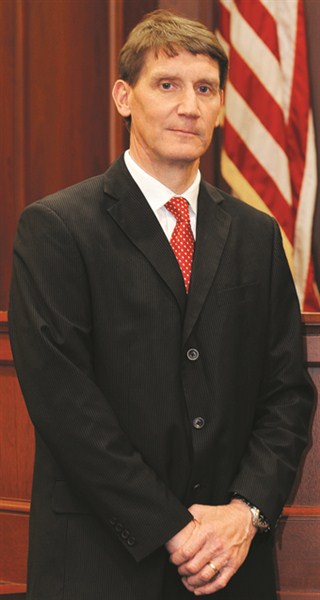 Napoleon B. “Poli” Barefoot, Jr. has joined the Wright, Worley, Pope, Ekster & Moss, PLLC law firm, partners in the Tabor City based firm have announced.
Retired last year after 22 years as a District Court Judge and nearly even years as an Assistant District Attorney for the 13th Judicial District, Barefoot will practice “Of Counsel” from the firm’s office on Main Street in Shallotte.
“Poli was renowned as the District Court Judge for Brunswick, Bladen and Columbus Counties who is most experienced in the area of domestic law and plans to concentrate primarily on domestic law and criminal defense,” said Richard Wright, Senior Partner of the firm. “Poli is a marvelous addition bringing his years of judicial experience.”
All ten partners of the firm expressed their pleasure on Barefoot’s new association in the position “Of Counsel.”

Offices
Richard Wright, Dennis Worley, Paul Ekster and Martha Henley Sledge are in the Tabor City office at 200 South Lewis Street.
Butch Pope is in the Whiteville office at 706 North Madison Street.
Barefoot joins Rick Scott at the Shallotte office, located in Suite 4 at 4498 Main Street. Rick Scott, a graduate of North Carolina State University (Cum Laude) was graduated from the Norman A. Wiggins School of Law, Campbell University, in 2009 which is the year he joined WWPEM. Rick now serves as President of the Brunswick County Bar Association.
Ken Moss, Melanie Nicholson, Kelly Galley and Mike Smith are in the Little River office located at 1180 Highway 17 North, Suite 2, Little River, with the office located in the First Community Bank building.
Wright, Worley, Pope, Ekster & Moss, PLLC has its roots with the founding of a practice in Tabor City in 1932 by Raymond B. Mallard. He formed Mallard and McGougan with his brother-in-law Frank McGougan in 1951. In 1971, the firm became McGougan and Wright and in 1981 it became McGougan, Wright and Worley.