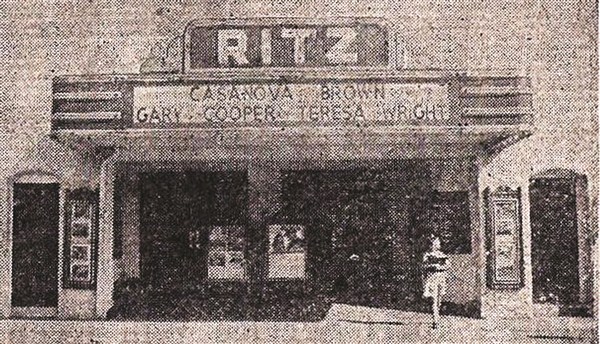 “Separate but equal” during the long years of segregation meant balcony seating for blacks at the Ritz Theater in Tabor City, an image provided by a former resident shows.
Lynda Turbeville, now living in Sanford, provided the image originally published in “Facts About Columbus County,” a 1945 publication of The Columbus County News in Chadbourn.
At least one of two separate entrances to the sides of the main front doors were for blacks, who were not, then, allowed on the main lower floor.
Turbeville said she remembers that the door at the right “was for ‘Colored’ since it was still that way when my bother and I used to go almost every Sunday afternoon.
“I honestly cannot remember about the door on the left. I wonder if maybe fire codes might have required two doors for exit.
In Turbevhille’s mind, the balcony seats were superior, and she wondered why she and her brother could not enjoy the “good” seats up stairs.
“As a child, I even asked the ‘bouncer’ one time if my friends and I could sit up there because I thought that elevated seats must be really special,” Turbeville said. “He just gave us a smile and said that we were not allowed there.”
Tabor City’s Ritz was hardly unique. In Robeson County, where black and Lumbee Indians outnumbered whites, segregation in those days mean whites on the ground floor of movie theaters, the two “minorities” in the balcony, separated by aisle, wall, and at least in one reported case by chicken wire, The Fayetteville Observer reported in a Feb. 27 story.
Separation by race went to an ever further extreme at least once, Turbeville said, remembering being told once of a school district with four systems, racially segregated, including white, black, and American Indian. She said she could not recall the fourth race.
“It sounded so weird,” Turbeville said, “but a lot of strange things went on in our history.”

Integrated facade
A decision on a new facade for the renovated Ritz is expected from the Tabor City Council next week.
It’s likely to be based on the old theaters’ 1993 appearance, long after separate entrances were gone.