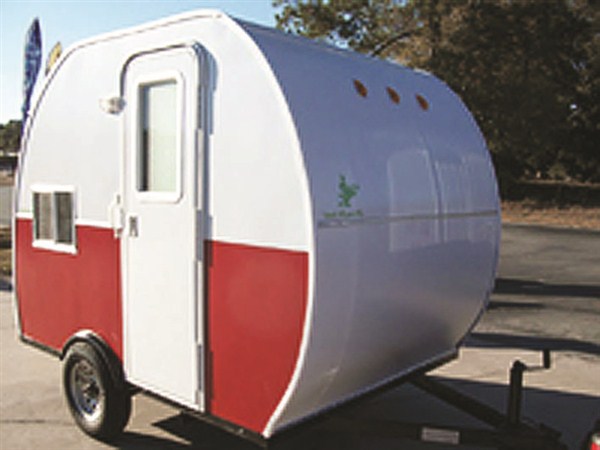 Toad Campers, a Calabash based maker of small camper trailers, will be hopping to Tabor City soon, bringing with it five employees and plans to hire six times that many within the next few years, Columbus County Economic Development Director Gary Lanier said Tuesday.
A perfect combination of timing, an available building, and location made the move possible, Lanier said.
Toad Campers will occupy space vacated by Direct Market Access (DMA) on Pireway Road, across from Food Lion, Lanier said. DMA purchased the much larger former Penn Ventilation/Hart & Cooley facility on U.S. 701 Bypass late last year.
A lease signing for the DMA building could happen as early as next week, Lanier said.
Toad Campers owner Scottie Ketron is a retired United Methodist Minister who in 2009 began building small camper trailers as a way to stay busy.
Business grew quickly, Toad incorporated in 2011, and annual sales mushroomed from less than $60,000 in 2010 to nearly $160,000 last year.
“Mr. Ketron said that if he can get moved, and hire the people he wants, he may do above $250,000 in 2013,” Lanier said.
Efforts to reach Ketron for this story Tuesday were not successful.

Growth?
Toad Campers’ has five current employees, including Ketron, and plans to hire seven after opening up shop in Tabor City. Demand for the product, and the need for space to fill orders, prompted Ketron to start looking outside Calabash, Lanier said.
With plenty of power and pressurized air lines already in place in the DMA facility, it was the clear frontrunner of several Tabor City businesses considered by Ketron, Lanier said.
“He felt like that was the best fit,” Lanier said.
Sweeting the deal was a grant offer from the Tabor City Committee of 100, to be paid if Toad Campers meets employment goals in its first year.
North Carolina Tier 1 Tax credits, available to industry in some of the state’s most economically distressed counties, will be available to Toad Campers because of the move to Columbus County, Lanier said.

Quick project
Economic development projects often take a year, or more, to see through, Lanier said.
“My first contact with Mr. Ketron was two or three weeks ago,” Lanier said.
Johnny Edge, a Nakina area businessman and friend of Ketron, encouraged him to look into Columbus County as he outgrew his Calabash facility.
Days later Lanier was showing Ketron several available buildings in Tabor City.
“We hadn’t even got all of his information into the computer, and he was calling ready to go,” Lanier said. “I wish they were all so painless. I think they will be a good addition to the industry base in the county.”