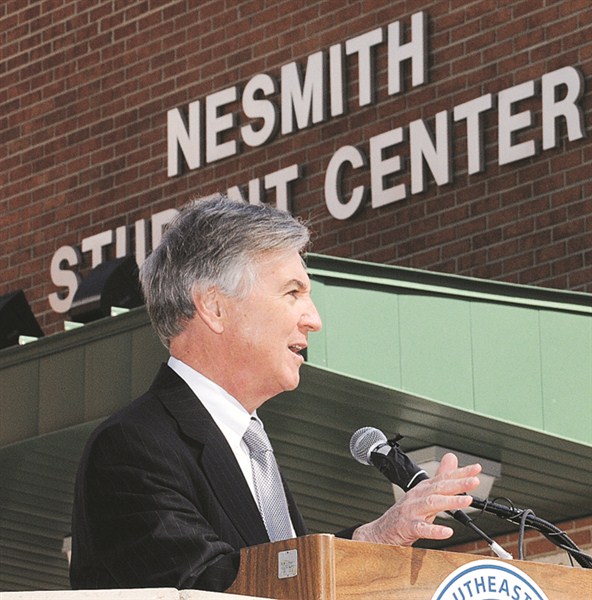 Attorney O. Richard Wright describes events leading to a $3 million gift to Southeastern Community College during the recent dedication of the Nesmith Student Center, named in honor of its benefactors.

At nearly $3.5 million, the estate gift from Tabor City’s Ben and Lucy Nesmith to Southeastern Community College was easily the largest in the school’s history, SCC President Dr. Kathy Matlock said during dedication ceremonies held on campus recently.
Most of the gift went to renovate the school’s student center, renamed the Nesmith Student Center during the dedication.
Dozens turned out on a brisk, but bright morning.
“We come today to celebrate a generous couple from Tabor City,” Matlock said. “Their estate gift brings us here today.”
She called the student center “a wonderful part of student life” that has been enhanced immeasurably by the Nesmith donation.
Matlock recalled meeting Ben Nesmith in Tabor City for lunch early in her tenure at SCC, joining Sue Hawks, Executive Dean of Institutional Advancement at the college.
“He loved his Todd House,” Matlock said of Nesmith’s favorite restaurant. “And he really loved his banana pudding.”
Nesmith also loved education. A graduate of the Citadel, attending both before and after serving in the U.S. Army Air Corp during World War II. Ben Nesmith died in 2007, outliving both his wife Lucy, and their only daughter. That set the stage for the gift, one he and his wife had long planned, attorney O. Richard Wright said.
“He was probably the smartest person who ever graduated from The Citadel,” Wright said. “He was asked to stay on there as a professor.”
Instead, Nesmith returned to Tabor City and the family insurance business, where he lived modestly, amassing the small fortune he bequeathed to SCC.
That gift has changed the heart of SCC, Matlock said. Its newly renovated student center “is the heart of the campus,” she said, “whether you look at it on the map, or look at our mission.”