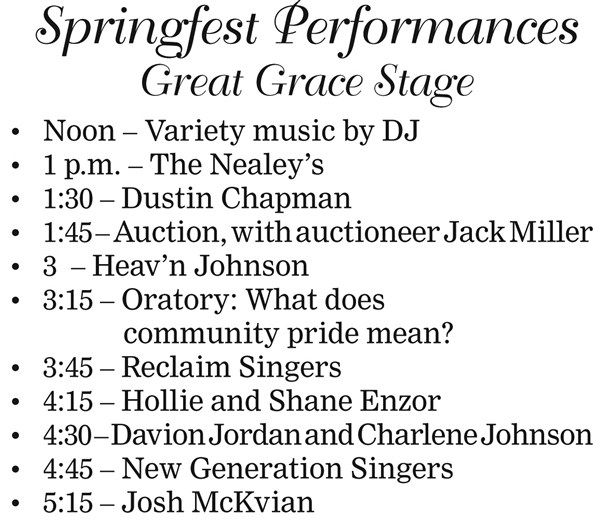 Springfest is shaping up for its debut this Saturday, Rev. Llewellyn Dewitt said in the aftermath of last weekends’ cleanup effort focused on Tabor City’s west side.
“For the first time around we consider it an overwhelming success,” Dewitt said of the cleanup work.
Dozens of orange bags provided by the NC Department of Transportation were left on the street sides by more than 100 volunteers before noon on Saturday. Most of those bags were cleared away later in the day, though Town of Tabor City crews had been expected to do that work this week.
Springfest is up next, with a full day kicking off with a sold-out prayer breakfast at 8 a.m. Saturday, a 10 a.m. parade, an afternoon filled with entertainment and other activities, and an evening crusade and closing ceremonies at 8 p.m.

Busy day
Tabor City Middle School will host the prayer breakfast, and serve as the starting point for the parade, which will head out School Street, turn onto Carolina Road, then onto NC 904, to Watering and Lewis streets, turning again on to West 2nd Street, then onto Bay Street, finishing up at West 6th Street, where most of the day’s other events will be focused.
A stage will be set up in front of Great Grace Church, and vendors will be lined up in the parking lot. At least 30 vendors were signed up early this week, with others likely, Rev. Dewitt said.
Columbus Regional Healthcare System will offer blood pressure and bone density screenings and promote digital mammography equipment and related services, including Tomosynthesis, said CRHS Community Outreach Coordinator Beth Brown.
Tomosynthesis, she said, uses digital equipment to make 3D images, providing a clearer picture for doctors with patients who have an abnormal mammogram.
“We will also be promoting hospital services and heavily promoting South Columbus Medical Center,” Brown said.
Peter Bleyer, MD has recently joined the South Columbus Medical Center staff, Brown said.
Performances on the Great Grace stage begin at noon and will end just before 6 p.m., just in time for an evening crusade to be led by Dennis E. Chestnut, PhD, a Tabor City native living in Greenville, NC and a retired Assistant Professor Emeritus in the Department of Psychology at East Carolina University.
Chestnut is the son of Mildred Chestnut of Tabor City and the late Harry Lee Chestnut.