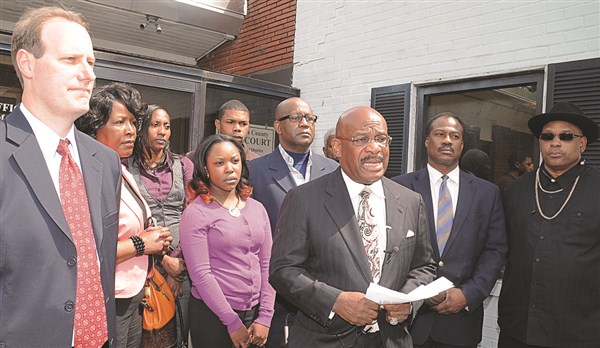 Jasmine Thar’s shooting death, just before Christmas 2011 in Chadbourn, “was the result of an accidental discharge for which criminal charges are not possible,” District Attorney Jon David said Monday.
Family Attorney Willie Gary said the owner of the gun, and its manufacturer, may face civil litigation. David, District Attorney for the 13th Judicial District of Columbus, Bladen and Brunswick counties, said his office would assist the family attorneys and make all of the case evidence available to them.
Gary and members of the families involved in the deadly Dec. 23, 2011 incident met in David’s office with prosecutors and investigators for nearly two hours Monday before staging a news conference to announce the end of the criminal case.
“I thought it was important that they hear about it from us, first, before reading it in the newspaper,” David said.
Gary said the family was satisfied with the outcome of the criminal probe.
“I thank Jon for the thoroughness of this investigation,” Gary said.

Three shot, one bullet
Thar, a 16-year-old from Charlotte, died from a single gunshot that injured two others.
Thar’s godmother, Treka McMillian; and McMillian’s niece, Jahmesha McMillian, were both injured by the bullet.
James Anthony Blackwell, 23, who lived just across East Third Avenue from Jahmesha McMillian, told police his high-powered rifle discharged accidentally, and that his finger was not on the trigger of the weapon he believed to be unloaded, the initial police report said.
Early evidence seemed to support Blackwell’s claim, David said, but prosecutors and investigators wanted a thorough investigation before reaching any conclusions, David said.
As Chadbourn police and the State Bureau of Investigation ramped up their probe, investigators found some materials that could suggest some racial motivation in the shooting, David said. That let to a request for the FBI to conduct a thorough background check on Blackwell.
The FBI was also asked to test the Remington Model 700 rifle that fired the deadly bullet.
As prosecutors waited and investigators worked, the rifle waited in line at an FBI lab, David said.
“I can’t control the timeframe of testing at the FBI,” David said.
Finally, in correspondence dated March 28 and received by David early this month, the results of those lab tests were shown.
David would not talk specifically on what the test showed, or exactly how the gun fired, citing the possibility of a civil lawsuit.
FBI agents, David said, found no evidence of any racist intent on the part of Blackwell, who was taking the rifle from a closet, was in the middle of the room, and could not have seen the family gathering for a pre-Christmas shopping trip to Myrtle Beach just across the street.
Multiple witnesses reported observing Mr. Blackwell screaming, crying, and showing extreme remorse directly following the shooting,” David said.
Investigators found the windows shut, blinds in a closed position, David said.

Consultation
“The shooting death of a child under these circumstances deserves nothing less than a complete and thorough investigation coupled with a legal determination that is carefully researched and thoughtfully considered,” David said.
Recent violent deaths of children in Boston and Newton, Conn. have heightened public awareness of young victims, and highlighted the need to be thorough in this case, David said.
David said the legal conclusion that no criminal charges were possible was well thought out, and well researched.
“Some of the best legal minds in our state, including lawyers from the Attorney General’s Office and the Institute of Government, were consulted regarding the appropriate legal conclusion,” David said.