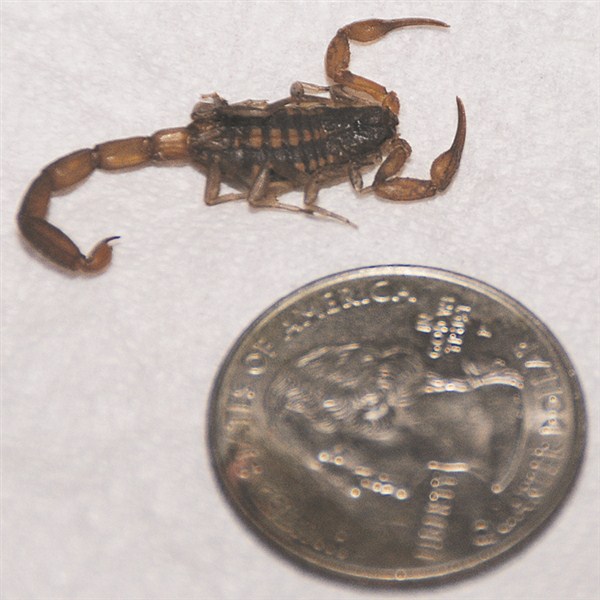 Estalene Hodges wasn’t sure what was creeping in her bathroom Friday afternoon, but she knew she didn’t want it there.
Husband and Tabor City Fire Chief Jerry Hodges wasn’t home, so she caught it in tissue and squeezed the life out of the inch-long creature with a venomous looking tail.
“I don’t know what it is,” Estalene said later Friday. “I know I don’t want it in my house.”
It was clear the critter resembled a scorpion, a small one, but we don’t usually find them in the eastern Carolinas, do we?
“There are scorpions in NC,” Cooperative Extension Director Dalton Dockery said in response to an email query about the critter. “However most individuals think of them as creatures of the desert.”
After consulting with several other extension agents, Dockery said they all agreed. “It is a scorpion.”

The devil, you say
A Southern Devil Scorpion, an online Cooperative Extension article written by entomologists Michael Waldvogel and P. Alder in consultation with Polk County extension agent J. Vining said.
Typically found in western North Carolina, the insect more commonly called the southern unstriped scorpion grows only to about an inch in length, the article says.
Southern Devil Scorpions are usually found only as far east as Polk County, an area just south of Chimney Rock. Perhaps ironically, since the creature was found in Columbus County last week, the Polk County seat is the town of Columbus.
Scorpions of the striped and other varieties “have been introduced accidentally with the movement of items from their native areas and could become established in parts of North Carolina,” the article said.
They typically prefer woodpiles around homes, or in crumbling stone, brick foundations, or inside crawlspaces of a house. While they prefer the outdoors, the bathroom would be preferred inside, because these insects are “usually found in very moist areas because that is where their prey is found.”
Jerry Hodges said he would be defending his home with pesticide, just in case, though the article said the Southern Devil Scorpion tends to move about alone, can go for months without food or water

Careful
Unlike its larger, and perhaps more famous relatives, these scorpions are not likely to be deadly, unless its human victim has an allergic reaction similar to one some experience with bee stings, the article said.
That’s not to say a close encounter won’t be painful.
“The sting of a scorpion is painful, so folks that have sighted a few in their home may want to take some simple precautions,” the article said. “The easiest step to take is to vigorously shake clothing before wearing. Shaking is particularly useful with shoes stored in a closet.
“Scorpions tend to be more active at night so beds should not touch the room walls. In houses where scorpions have been seen before, individuals should not walk barefooted at night.”

Fear not
So, how common are scorpion sightings in these parts?
“I would say probably very ‘rare’,” Dockery said. “In my almost 19 years in Extension serving in both Columbus and Bladen counties this it the first Scorpion that I have come across.