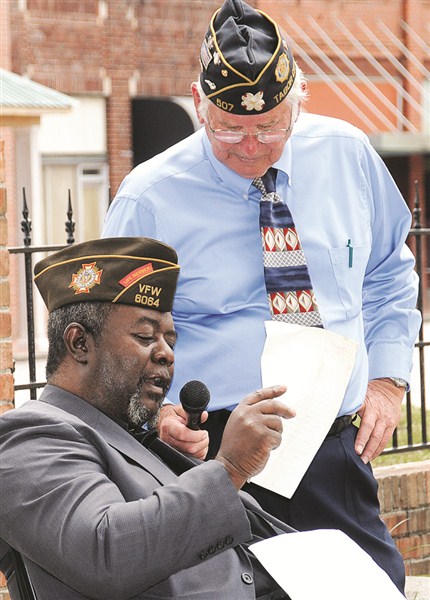 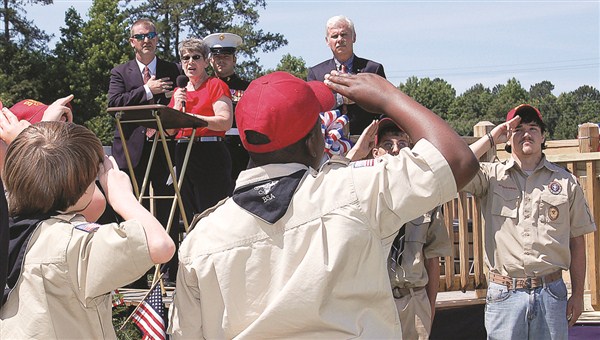 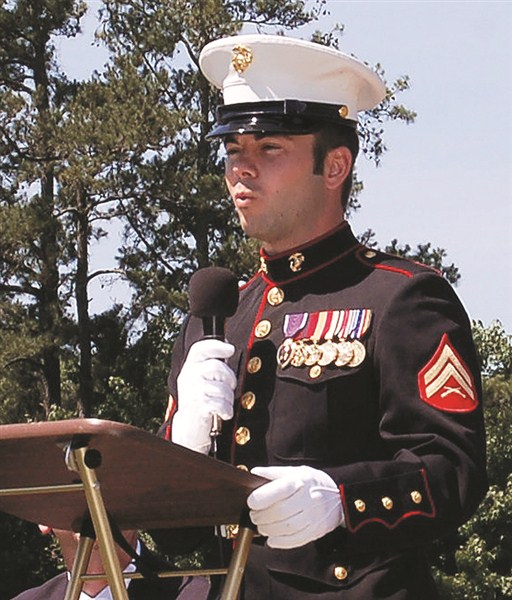 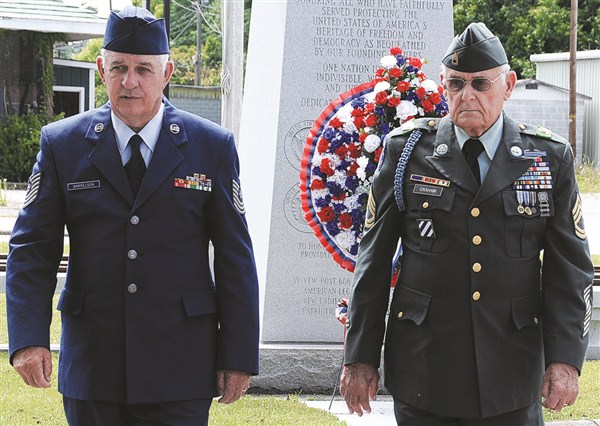 Editor’s note: A confusing error occurred in jumping this story from page-to-page in our May 29 print edition. Here is the story, in its entirety.

Faith, fate, and a changing of the guard were Memorial Day themes at separate Tabor-Loris Community observances held during the weekend.
Twin City Memorial Gardens hosted a Remembrance Service on Saturday, while Tabor City’s American Legion and Veterans of Foreign posted hosted a similar program at the town’s Military Memorial at the Tabor City Public Library on Sunday.
A U.S. Marine Corp veteran spoke of his wartime brush with death at the Twin City service, and Tabor City’s VFW Commander announced his resignation during Sunday’s program.
Both observances included patriotic tributes, song, and prayer.

Twin City
Boy Scouts from Troop 525 and American Legion Post 41 from Loris set the stage Saturday with the setting of a memorial wreath. Organizer Kevin Braswell gave the formal welcome, and served as emcee.
After an opening prayer from Rev. Mack Hutson, the Army JROTC from Loris High School brought in the flags, which were hoisted by Legion members and Boy Scouts as Betty Fuller offered a soaring rendition of The Star Spangled Banner.
Brandon Blair, Youth Pastor at Langston Baptist Church in Conway and a Purple Heart recipient for combat injuries sustained while serving as a U.S. Marine in Iraq and Afghanistan, talked of a hospital stay that followed a gunshot wound that could easily have killed him.
Another young soldier brought Blair a fresh watermelon, no small feat in remote Kuwait, and often talked of how lucky Blair was to have survived, the Marine said.
In a tragic twist of fate, that young solider died just a week later, shot with the same type of bullet, and hit in the same area of his body as Blair, leaving Blair with regret.
“I wish I had told him that it was not luck that kept me from dying,” Blair said. “That it was the hand of Jesus Christ. Jesus had plans for me that did not include dying right now. I wish I had told him that.”
Blair encouraged everyone to always share the story of Jesus with others.
There was additional singing from Dale Holt before Braswell closed the service and offered discount coupons donated by local businesses to the veterans who attended.

Tabor City
Michael Chestnut, Commander of VFW Post 6064 in Tabor City for the past eight years, announced during Sunday’s service that he would be stepping down from that post. Second Vice-Commander David Harrelson will be assuming command of the post, Chestnut said.
Health issues have kept Chestnut from being active in most post activities in recent months, and he said he needed time, he hoped, to regain his strength.
“I hate to give it up,” Chestnut said, “but my heart’s not in it, and I know my body’s not in it. I will miss it.”
Chestnut pledged to be a resource for both the VFW and American Legion Post 0507, where he was also active.
“Whenever there’s a problem, I’ll be there,” Chestnut said.
Chestnut also spoke of the sacrifice military veterans have made, and continue to make as the nation remains at war in Afghanistan.
War, for America, is best kept “over there,” Chestnut said.
He encouraged everyone to show their support for those who serve, because “We would not want to know that you did not appreciate their sacrifice.”
Chestnut read the names of 22 military veterans who have died during his eight years as Post Commander, many from World War II and the Korean conflict.
American Legion Post Commander David Corbett served as emcee for the proceedings, and reminded all that Memorial Day is not about burgers, mattress sales and vacations, but about sacrifice.
“It’s not a holiday,” Corbett said. “It’s a day of remembrance. There is a lot of blood that has been shed.”
Prayers were offered during the service by Bishop William Highinbetham, OSB. Members of the South Columbus High School JROTC hoisted the flag. Veterans David Harrelson and “Pop” Graham presented the Memorial Wreath.
Music was provided by The Nealeys and Dashawn Brown.