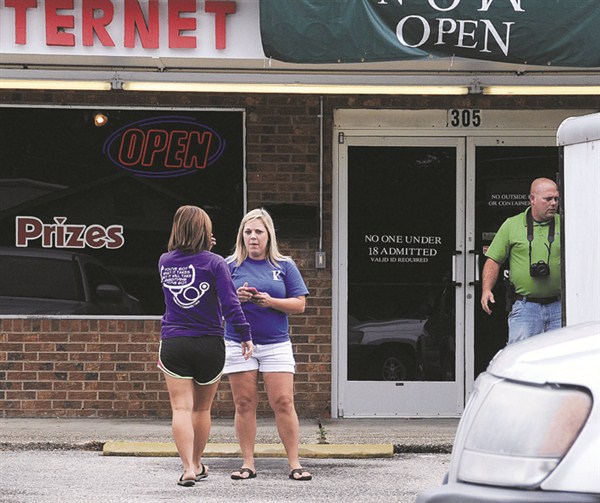 An internet gaming worker talks with another woman outside a Tabor City business shut down Thursday. Sheriff’s Sgt. Barrett Thompson stands nearby. A previous posting indicated both women were employees of the business. (Deuce Niven photo)

Video gaming machines were seized from businesses in Tabor City and the New Hope community Thursday in an ongoing investigation that effectively shut down those businesses, Sheriff Chris Batten said.
Deputies seized 18 machines from Tabor City, eight from New Hope, Batten said. No charges were filed Thursday.
A search warrant served at a third location on Tom Sessions Road near Whiteville later Thursday resulted in the seizure of 12 “Pot of Gold” machines there, Batten said. Machines at Tabor City and New Hope were newer, and not of the old “Pot of Gold” type, the sheriff said.
Eight more machines were seized from a home on Midway Road south of Whiteville Thursday night, Batten said, bringing to 46 the number of devices taken by deputies during the day.
Neither of the businesses were named, Batten said. The Tabor City and New Hope businesses were were co-owned by Jim Reaves, a Whiteville businessman who supplies the electronic gaming machines, Batten said.
Tabor City’s business was co-owned by Pete Williamson of Chadbourn, while Greg Powell of Whiteville co-owned the New Hope establishment, Batten said.
Deputies were working late Thursday to identify the owners of the machines sold on Tom Sessoms Road, and Batten could not identify the owners of the Midway Road home.
Batten said undercover officers had visited the Tabor City and New Hope establishments and received illegal payoffs from the machines, a violation of state law.
“We’ve given them warnings,” Batten said. “They have continued to operate, so now we come to this.”
Similar establishments operated freely for some time in North Carolina, but a state Supreme Court ruling last year shut most of them down effective Jan. 1 of this year.
This story has been updated during the evening.
Check back here for more as this story develops, and see the Aug. 21, Tabor-Loris Tribune print edition for details.