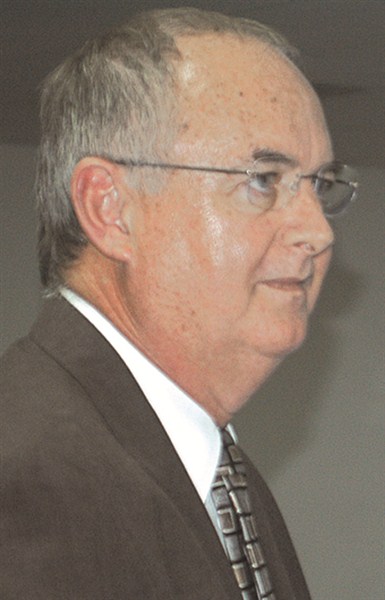 A guilty plea to a misdemeanor charge of willful neglect to discharge the duties of his office ended felony prosecution against former District Attorney Rex Gore on Monday.
Entering the plea before Superior Court Judge W. Robert Bell, Gore was given a 60-day suspended jail sentence, fined $5,000 plus court costs, placed on 12-months supervised probation, and had his license to practice law suspended for six months. His supervised probation will become unsupervised once the fine is paid.
It was a deal Gore said he could live with.
“This resolution is one that I’m agreeable to,” Gore said later Tuesday morning. “You make a decision, you believe it’s right, and it turns out not to be right. We’re glad to move on and have it over with.”
“Mr. Gore’s case was a mistaken belief in authority,” defense attorney W. James Payne said in a news release. “The events that led up to the charges were unusual and the lines of budgetary authority mistakenly, but honestly, believed. I am happy to say that the this resolution allows case resolved and Mr. Gore is able to continue practicing law to hold his head high as the honorable man that he is.”
Gore, who was District Attorney in the 13th Judicial District (Bladen, Brunswick and Columbus counties) hired Elaine Strickland Kelley in May 2005 as his chief assistant in Bladen County.
Kelly entered a guilty plea in May to a misdemeanor charge of misprision of a felony, admitting that she failed to report a crime she knew was being committed.
A grand jury indicted Kelley last August on felony charges of conspiracy to obtain property by false pretenses, and of obtaining property by false pretenses.
Those indictments charged that Kelley filed weekly travel expense reports showing business travel from Elizabethtown to Bolivia, where the DA’s main offices are located, but that “she knew these representations to be false.”
Gore was indicted on the conspiracy charge, but was not accused of profiting from the crime.
In a written statement, Gore on Monday said his decision regarding Kelley’s compensation was one he believed to be right in 2005.
“Any mistake made was mine alone,” Gore said. “My error should not be used to cast a shadow over the great work that prosecutors and staff in the office of the District Attorney have done over the years and continue to do now under new leadership.”
Gore said the travel reimbursement for more than 600 miles weekly to and from home and work could have been offset by a higher salary.
“However, I believed that the travel expense I approved was more than offset because I was returning to the state all the money I did not use from my allotted salary budget,” Gore said. “During Ms. Kelly’s tenure in my office I returned thousands of dollars more each year in unspent salary funds than Ms. Kelly received as travel.  I received no monetary benefit from my decision.”
Gore said the travel compensation was intended to be temporary, but continued even after Kelley was given pay raises.
“Apparently, I did not communicate that clearly,” Gore said. “If I had routinely reviewed the travel expenses during the five-plus years she was employed, I would have recognized the ongoing mistake.  I am embarrassed by, and sorry for, my neglect of that duty of supervision.  I should have done better.”
Kelley, in her plea, agreed to pay restitution of $14,190.39. She was also ordered to serve 12 months of unsupervised probation, with a special condition that her law license be suspended for six months.
This story has been updated throughout the morning. Check back here for more on this developing story, and see the Aug. 21 Tabor-Loris Tribune print edition.
Posted in News