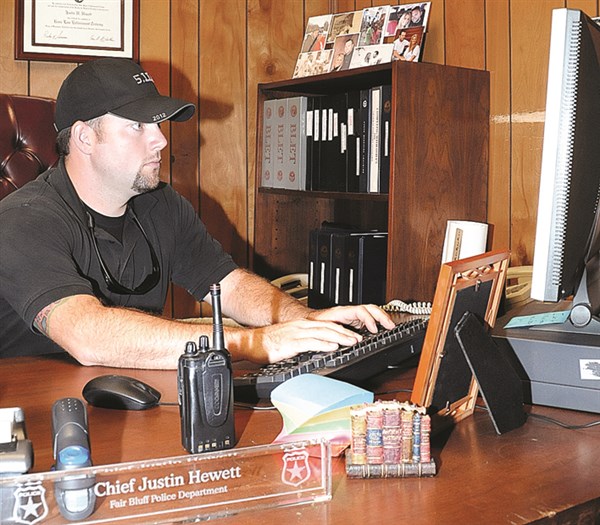 Justin Hewett on the job in Fair Bluff in July 2012

Justin Hewett cleaned out his desk at the Fair Bluff Police Department on Sunday, a day after resigning as Chief of Police to join the Columbus County Sheriff’s Office.
Hewett, 27, notified Mayor Randy Britt of his departure Saturday, giving a little more than 24-hours notice. He would not voice a reason for the short notice, but said the decision to leave the office he led for less than 15-months was an easy one.
“To further my career and to better my family,” Hewett said.
Hewett takes his new post as Assistant Jail Administrator on Sept. 26, Maj. Lewis Hatcher of the Columbus County Sheriff’s Office said. He fills a post left vacant since May, when Jail Administrator Capt. Perry Blanks retired, and Capt. Clementine Thompson was promoted from assistant to the chief position for the Columbus County Detention Center.
Hewett was hired in the aftermath of firing of Chief Marty Lewis after his arrest in May of 2012, allegedly in the middle of a drug deal while in uniform, seated in his patrol car, in the Post Office parking lot within sight of the Lumber River.
Lewis was fired the same day a Columbus County grand jury indicted him on drug trafficking and conspiracy charges. Also fired was Town Clerk Tamika Packer, charged with trafficking in a controlled prescription medication.
Hewett said he was pleased with the work the department has done in the past year.
“I would say we turned the department from nothing to a reputable, trustworthy, honest police force,” Hewett said.
Moving on to the Sheriff’s Office “is the best move that I could make,” Hewett said. “The offer came at the right time.”
Hatcher said Sheriff Chris Batten offered the job to Hewett after a meeting between the two at the county Law Enforcement Center.
“He just wanted better hours, time to spend with his family,” Hatcher said of Hewett.
That time with family starts now, Hewett said, with more than two weeks before starting his new job marking a vacation with his wife Brittany and their new daughter.
Look for more on this story in the Sept. 11 Tabor-Loris Tribune print edition.