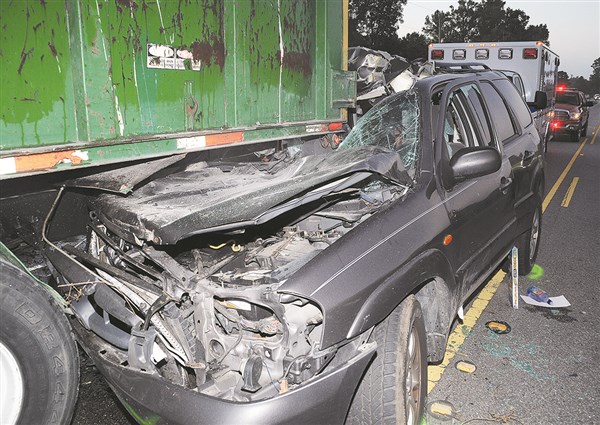 A Loris man apparently noticed the Waste Management leaf and limb truck working on NC 410 just before dawn Tuesday just moments before slamming into it, killing him, Tabor City Police Department officers said.
Larry Ray Swinney, 53, of Mitchell Street in Loris, died in the 6:45 a.m. crash, Capt. Russell Conway said. He was on the way to work in Chadbourn, where he was manager of the Dollar General store.
Keith Owens, 39, of Elizabethtown was standing at the grappling arm controls on the rear of the truck, and said later the impact jarred him, but did not throw him.
The impact pushed the truck, which had supports extended as Owens picked up limbs left on the road shoulder, nearly four feet. Painted yellow on the back, the truck had a yellow flashing light mounted to he bumper. It was pushed up under the truck, but still flashing after the crash.
Joe Brown Hwy, (NC 410) was shut down from US 701 to O.L. Coleman Road for more than two hours, re-opening just before 9:10 a.m.
Look for updates here as they become available, and for the full story in the Oct. 2 Tabor-Loris Tribune print edition.