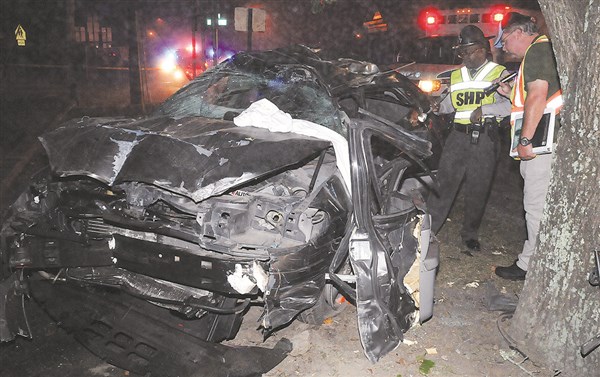 A high-speed crash in a low-speed area of town claimed the life of a local man just blocks away from his home early Sunday, Capt. Russell Conway of the Tabor City Police Department said.
Edmond Justin Worley, 24, of Prince Street, died about 2:15 a.m. after his 2002 Ford Taurus slammed into a metal clothing collection box, similar in appearance to a trash dumpster, then the driver’s side door slammed into a tree.
Worley was travelling north on Pireway Road, his small car moving at least 80 miles per hour in the 35 MPH zone, when he rounded a slight curve approaching East 5th Street at Inman Funeral Home, officers said.
A long set of skid marks led into the Carolina Tire parking lot, where the metal clothing donation box sat near the corner. Both the box and car went across East 5th Street, the box coming to rest near the fence at Tabor City Elementary School.
Worley’s car bounced off a tree near the corner. Its driver’s door skin was wrapped around the tree, bark was peeled away above it, and the car came to rest just a few feet away.
Worley’s obituary information can be found here.
Look for more on this story in the Oct. 9 Tabor-Loris Tribune print edition.