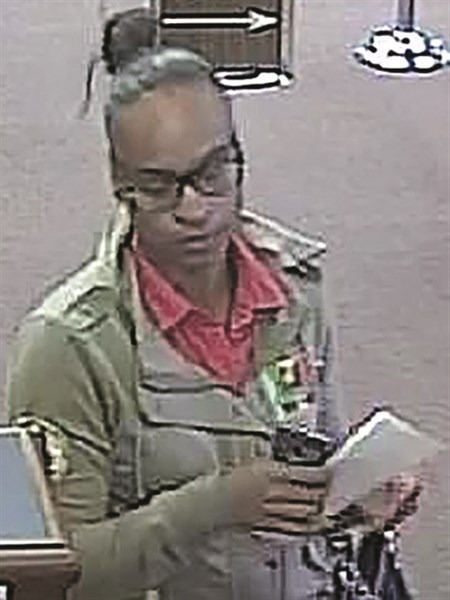 FRIDAY UPDATE:
Despite some photographic evidence to the contrary, Whiteville police now believe a woman who cashed a fraudulent $8,000 check earlier this month did, in fact, show her own photo ID, Sgt. Ted Dixon said Friday.
A warrant charging Chessica Peters, 33, of Fayetteville with obtaining property by false pretense was obtained by Dixon Friday, he said, after relatives of Peters identified her from images published in news accounts of the Oct. 10 crime.
“They told us she has wigs and ways that she changes her appearance,” Dixon said. “I would call her a master of disguise. She could walk into the same bank twice and they wouldn’t recognize her.”
Anyone who knows where Peters can be found is asked to contact the Whiteville Police Department at 910-642-5111.

THURSDAY STORY:
A woman who walked into a First Citizens Bank branch in Whiteville earlier this month walked out with $8,000 in cash after cashing a bogus check, Sgt. Ted Dixon of the Whiteville Police Department said.
Entering the bank on Oct. 10, the woman presented state I.D. that identified her as Chessica Peters, Dixon said. Police have confirmed that the woman who cashed the check is not Peters, a resident of Fayetteville, but they don’t know who the woman is.
Anyone who can identify the woman, caught on bank security video, is asked to contact the Whiteville Police Department at 910-642-5111.