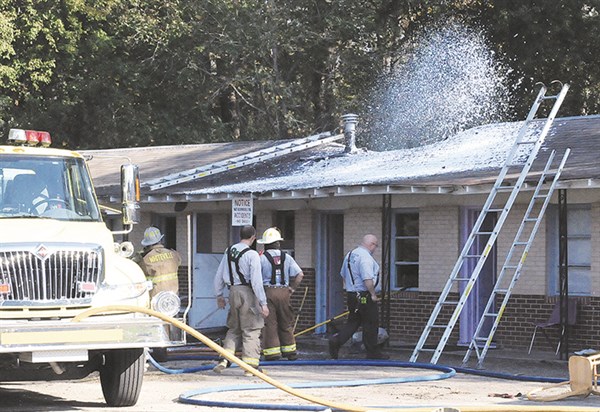 Fire retardant foam, sprayed from inside a room at the Bullard Motel in Fair Bluff, leaves a snow-like cloud through a hole in the roof. (Deuce Niven photo)

Owner Red Evans said fire that heavily damaged the Bullard Motel on U.S. 76 in Fair Bluff Wednesday afternoon began in the attic, and Columbus County Fire Marshal Scott Merritt said an investigation into the cause would be thorough.
That investigation had its focus on a water heater in a room behind the 8-room motel office, Merritt said later Tuesday. Investigators, with an assist from the State Bureau of Investigation, will take a second look at the fire scene Thursday, Merritt said.
“At this point I can not rule out a malfunction in the water heater as the cause of this fire,” Merritt said.
That water heater was in a small room, and fire spread quickly upward, into an attic that was open throughout the length of the building.
Fair Bluff Fire Rescue Capt. Jerry Meares said fire was through the roof in the center section of the motel when his department arrived before 3 p.m. Firefighters from Cerro Gordo, Chadbourn, Whiteville, and Horry County responded to assist, with the Tabor City Fire Department putting a truck in Fair Bluff’s station while its crews were occupied.
Fair Bluff firefighters had the blaze beaten back in about 20 minutes, but it was more than an hour into the call before Meares called the fire under control. A deluge of water from above, from Whiteville Fire Department’s ladder truck, was used to make sure there were no undiscovered embers ready to re-ignite the blaze.
Only two rooms of the motel were occupied, one by a family of five, including three children; the other by a single woman, Merritt said. The woman accepted American Red Cross assistance to replace personal belonging damaged by smoke and water. The family refused to sign documents necessary to obtain a new motel room for the night, Merritt said.
For more on this story see the Nov. 6 Tabor Loris Tribune print edition.