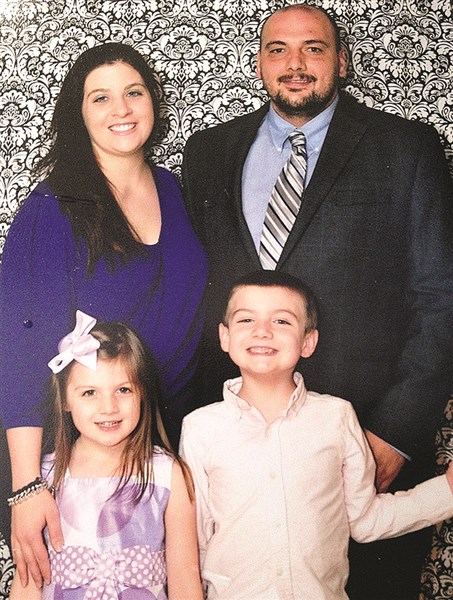 Carolina and Jayden Watts, with parents Chelsey and Joey

Editor’s Note: Jayden Watts’ fight took a turn last week with unexplained seizures that put him in the hospital. He was discharged from the hospital on Sunday, and is still expected to undergo a bone marrow transplant later this month. Follow his journey at Jayden Watts’s Journey on Facebook, and see the complete story excerpted below in the Nov. 27 Tabor-Loris Tribune print edition.

Jayden Watts is a fighter.
Not quite 7, the son of Tabor City native Joey Watts and Chelsey Lawrimore Watts, formerly of North Myrtle Beach, Jayden’s been bucking the odds with grit and determination since his birth in 2007, Joey says.
Born with a collapsed lung and club feet, Jayden spent the first two weeks of his life in the neonatal intensive care unit, and six weeks with hard casts on both legs. Adjustable braces followed.
At three Jayden was diagnosed with autism, defined by the National Institute of Neurological Disorders as “characterized by social impairments, communication difficulties, and restricted, repetitive, and stereotyped patterns of behavior.”
Joey said those struggles have been difficult for Jayden, and for the family that now numbers seven. Sisters Emma, Carolina and Natalie range in age from 5 to 2, and little brother Mark is a year old.

Hurdles, now speed bumps
“All these hurdles that we thought we had, they’ve turned into speed bumps,” Joey said recently.
Cancer, specifically Leukemia, defined by WebMD.com as a cancer of the blood cells, has changed Joey’s outlook, and the families, as Jayden had taken on a new battle that comes with new challenges right in the middle of this holiday season.
Jayden’s new challenges began as 2012 dawned.
“We were at Dad’s for New Year’s Eve, visiting family in Florence,” Joey said. “Jayden had run a fever for a couple of days, and that night it went to 104.7. We carried him to a local hospital. They didn’t do any blood work, they thought he had a virus, had a cold. They said it looked like pneumonia.”
Discharged from the emergency room with prescriptions that included antibiotics, Jayden showed some improvement. He kept a fever, not as high as before, but persistent after five days.
Residents of Columbia, his parents took Jayden to Palmetto Health Children’s Hospital. Doctors initially suspected respiratory syncytial virus (RSV) an antibiotic resistant upper respiratory infection, and they ordered blood test. Those tests showed very high white and red blood cell counts, indicators of leukemia, which was confirmed by further tests.