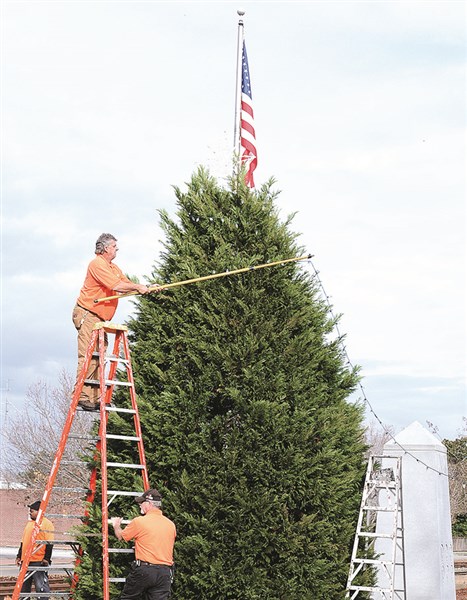 Despite gloomy skies and the threat of cold rain, Tabor City’s Christmas Parade under the lights will take place at 6 p.m. today, Town Manager Al Leonard said.
We waited until 3:30 to see if it was raining, and it’s not raining,” Leonard said. “The parade is on.”
Weather permitting, Tabor City’s Christmas Tree Lighting program, sponsored by the Greater Tabor City Chamber of Commerce, will follow the parade at the Public Library.

Friday afternoon post
Rain or shine, the Loris Christmas Parade will go on at 10 a.m. Saturday, Chamber of Commerce Assistant Samantha Norris says.
Moving from nighttime to morning for the first time in many years, the Loris parade will follow Friday night’s tree lighting ceremony, set for 7 p.m. downtown.
Tabor City’s parade keeps its nighttime tradition, scheduled to stop off at 6 p.m. Saturday. But the same weather system that may make the Loris parade soggy, could force cancellation of Tabor’s, Town Manager Al Leonard said Friday. A decision on the parade will be made by mid-afternoon Saturday, Leonard said.
Tabor City’s tree lighting, scheduled to follow the parade, will be cancelled if the parade is, said Greater Tabor City Chamber of Commerce Executive Cynthia Nelson.
If the Tabor City events are cancelled, they will not be re-scheduled, Leonard said, because crowded holiday schedules simply leave no room.
There’s plenty more going on in the Tabor-Loris Community for the holidays. For details see the story in the Dec. 4 Tabor-Loris Tribune print edition.