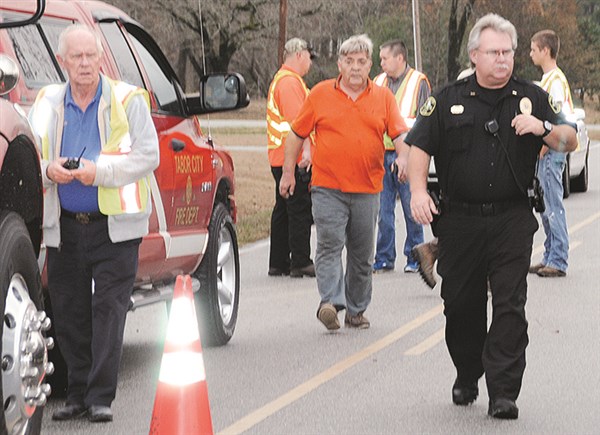 Ronnie Bell, in the orange shirt, on the scene of Tuesday mornings auto incident that killed one of his neighbors. (Deuce Niven photo)

A Carolina Road woman walking on the road shoulder near her home was struck and killed by a work van Tuesday morning, Columbus County Coroner Linwood Cartrette said.
Rosanna Dixon, 52, died not long after being struck by the work van of Ronald James “Ronnie” Bell, 65, whose home was next door to that of Dixon’s, south of Tabor City, Cartrette said.
Dixon was walking along the road with her teen daughter, Deanna Dixon, Cartrette said.
Bell was charged later Tuesday with misdemeanor death by motor vehicle and driving left of center, Trooper J.C. Freeman of the North Carolina Highway Patrol said. Bell was released from the Columbus County Detention Center after posting a $10,000 bond.
Bell was traveling south on the two-lane blacktop when he crossed the center line, his 1994 Chevrolet work van leaving the roadway on the left side and striking Dixon, who was walking on the road shoulder, Freeman said.
Dixon died on the scene, with multiple trauma the cause of her death, Cartrette said.