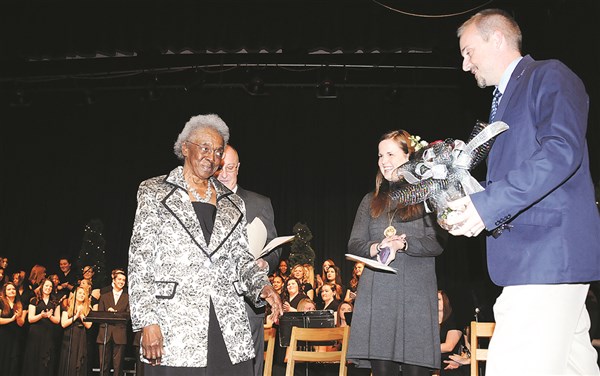 She’s been a public school teacher for 57 years, and several times her school’s Teacher of the Year.
A well-kept secret for two weeks was broken Thursday morning, as students, faculty, and guests at South Columbus High School were told that Family and Consumer Sciences Education teacher Everlene Davis has been named the South Central Region’s Teacher of the Year, and is now one of nine finalist for North Carolina Teacher of the Year for 2013.
Current state Teacher of the Year Karyn Dickerson made the announcement, and placed a crown on Davis’ head with Columbus County Schools Superintendent Alan Faulk and Principal Eddie Beck on the stage. Beck presented a bouquet to Davis, who said she was stunned, and gave credit to God for giving her strength to teach so long.
For more on this story see the Dec. 18 Tabor-Loris Tribune print edition.