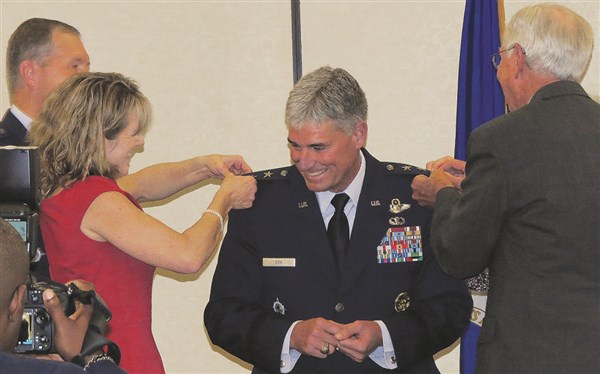 With his Loris roots evident, Samuel D. Cox received his third star as he was promoted to Lt. General during a Dec. 1 ceremony at Joint Base Charleston, SC.
His wife, Tammy, and father, retired Air Force Maj. Jerry Cox, flanked the new Three-Star General, pinning those stars on either lapel.
With the promotion Cox will leave his post as USTRANSCOM Operations and Plans Director to assume his new responsibilities as Deputy Chief of Staff, Manpower, Personnel and Services, Headquarters U.S. Air Force, the Pentagon, Washington, D.C., an Air Force news release said.
Tanner Cox, nephew of the new Lt. General and son of Joe Cox of Loris, sang The National Anthem for the ceremony.
A Loris native, Lt. General Cox is the son of Jerry and Ann Cox of Loris, and has two local siblings, Joe Cox and Cindy Fox. After serving at The Pentagon, he was in 2008 named the Air Force Academy’s commandant of cadets in Colorado Springs, Col.
For the full story see the Dec. 25 print edition of Tabor-Loris Tribune, on sale now.