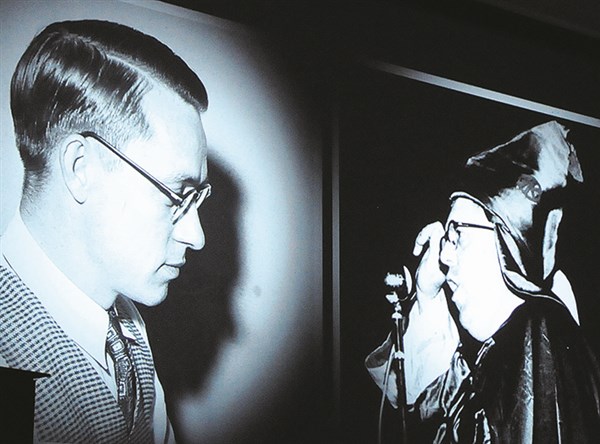 A still image from “The Editor & The Dragon”

Public TV viewers in North Carolina will have an opportunity to view “The Editor And The Dragon: Horace Carter Fights The Klan,” a documentary produced by Center for the Study of the American South at the University of North Carolina at Chapel Hill and Memory Lane Productions, next week.
A trailer for the production, on the Center’s website, can be seen here.
It is scheduled for broadcast at 10 p.m. on Thursday, Jan. 9.
Based on the struggles of W. Horace Carter, who founded this newspaper in 1946, the documentary focuses on his Pulitzer Prize winning campaign to rid this part of the Carolinas of the Ku Klux Klan.
Oscar winning actor Morgan Freeman narrates the 58-minute documentary.
Archival footage from CBS legend Edward R. Murrow’s story on the 1952 Pulitzer, other film and still images from that error, and dramatic recreations combine to present a compelling narrative of the very real dangers Carter faced as he challenged the Klan in the Carolinas and its leader, Thomas L. Hamilton.
An FBI investigation resulted in arrests and convictions of Klansmen who flogged and beat blacks and whites who crossed what the KKK saw as moral lines.
Additional broadcasts seem likely on UNC-TV. Filmmakers Walter E. Campbell and Martin Clark, following the film’s premier last May, said they were hopeful the documentary will eventually receive a wider airing on PBS, the national Public Broadcasting System, giving the film exposure across the country.
Posted in News